Look and Read: Bob and Carol Look for Treasure 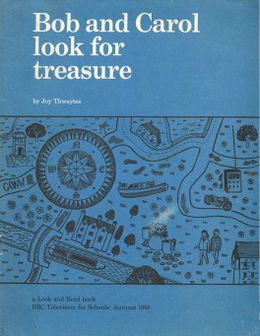 Bob and Carol Look for Treasure is a unit of the BBC schools TV series Look and Read from the 1960s, covering Language and Reading for primary school pupils.

The very first Look and Read story is a simple kids' adventure story featuring a scattering of recognisable plot devices. The unit is clearly split up into two separate sections of the same story: The Lost Treasure is all about thinking and solving clues, while The Stolen Treasure is much more action-packed, involving real villains, chases and dramatic goings-on.

The two villains are absolutely glorious: the bad-tempered Fat Man with his singular expletive "creeping cat!" and the strange Number One, constantly clad in black glasses. Some of the scenes are completely evocative of late-60s weirdness: the two baddies meet to exchange loot in the same park, but insist on communicating via a little toy boat; Number One charges off up a quiet Midlands canal in a fast motorboat and gets stuck in the locks; the secret hiding place which fooled treasure-seekers for centuries was under a big stone in the garden; a message in a bottle sent off into a canal happens to be picked up by the person it was meant for less than half-an-hour later...

And now a quick episode guide...

... and finally here is a much more detailed episode guide!

Who was in which episodes? 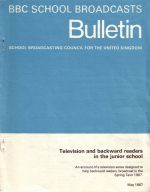 The response of many children and teachers who watched the first broadcast of this story was surveyed in a BBC School Broadcasts Bulletin entitled Television and Backward Readers in the Junior School, written by Ellen C. Mee a consultant to the School Broadcasting Council.

Here are two genuine letters from child viewers of the story, sent to the Look and Read production office in Spring 1967, as quoted in the Bulletin:


We have enjoyed your programme and it is very kind of you. You have taught Mrs Todds class to read. We have got a book of Bob and Carol and on the first page we have Bella the goat and on the second page we have the canal boat. I like the fat man saying 'Jumping Jack'. I wish I had a boat like the Red Dragon. It is a wonderful boat. We know the colours, red and green. We have a Red Dragon and we have coloured our bottle with messages with beautiful colours. We have Bob and Carol books each and we have enjoyed reading them. I like Bob and Carol and Dan and I think they did well catching the fat man.

We are sorry the programme has finished and hope you will soon give us another "Look and Read" programme.

Here is a review of this story written for the journal Visual Education by a teacher who used Look and Read's very first broadcast in Spring 1967. It carefully avoids mentioning anything about the actual story, but it does include a little about the pupils' and teachers' material, and reveals that the programme committed one of the greatest mistakes of black-and-white television.


This series was designed to help Junior children who have some facility in word recognition but who nevertheless find reading difficult.
In this school the series was followed by a less able class of 20 children with chronological ages 7-9, but with reading ages from 6-7½.
As a different approach to the teaching of reading, it is felt that the programme was stimulating and very worth while. The story was well within the children's comprehension and each new instalment was looked forward to with eagerness.
The follow-up provided ample work, but as there was so much that could be done one wonders whether some improvement could be made to the children's pamphlets for their future use. Each week the appropriate section had to be removed from the pupils' pamphlets and put into the children's own work book. This took a long time and did not make a satisfactory book.
It might be better to present each section bound as a separate unit with a few blank sheets attached for follow-up work, which could then be stored in a loose leaf folder.
Some weaknesses in presentation were eradicated as the series went along, e.g. some difficulty was experienced in the early programmes when white printing appeared on a light background. This was remedied in the later programmes, when a black band was used as a background for the lettering.
Timing also presented some difficulty for this particular class. The children found that the reading could be done easily in the alloted time, but the flashing of the little men letters and sounds was much too fast for them.
As an experiment this was very successful and one would feel that the series realised its aims and is worth repeating.

A Bob and Carol Look for Treasure reunion! Veronica Callow who played Carol back at Packwood House where much of the story was filmed, in 1999. 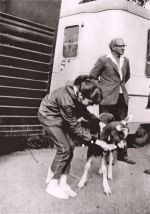 Behind the Scenes on Bob and Carol Look for Treasure

Bob and Carol look for treasure was filmed from 12th to 23rd September 1966 in the Birmingham area. Click here to view a page from the shooting schedule, mainly covering the flashback story of the Kent family from episode 3.

at Solihull, and scenes were also filmed at Lowsonford village

at Snitterfield, the Gas Street Basin

in central Birmingham and on the 'Birmingham canal'.

Packwood House is open to the public and can still be visited today, here is an independent website about the house including lots of pictures (archived 2006). Gas Street ("just beyond the BBC canteen in the centre of Birmingham") can be visited by going to Birmingham and driving along it.

Veronica Callow (née Purnell - Carol herself!) had a great time filming the programme, but had some trouble acting alongside the stubborn animal playing Bella the goat. Veronica was 15 when the story was made, but says she "looked about 12" (!) and Stephen Leigh, playing Bob, was slightly younger: "he could be a bit annoying sometimes but we got on quite well"! The blundering villain known as the Fat Man, played by Bob Bridges, did not apparently come across as especially evil; Number One seems to have been the nasty one, though Veronica had hardly any scenes with him and doesn't remember him at all.

The actors from the drama were invited down to London to view a short-film version of their scenes after filming had completed, though they never had the chance to see the finished programmes including the teaching segments. Veronica tried taking a morning off school, claiming she was going to the dentist, to sneak a look at the broadcasts, but unfortunately got found out! 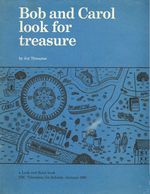 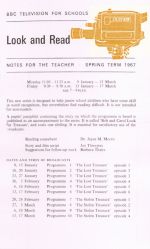 The BBC began making filmstrip copies of some of its schools programmes available for loan to educational establishments in the early 1960s. Look and Read was never included in this scheme and no loan or hire rights to the programmes were ever arranged. However, a 16mm telerecording of episode 4 (coincidence?) of this story was offered by the Schools Broadcasting Council for use in teacher training colleges (but not normal schools) accompanied by copies of the teacher's notes and pupil's book plus a special set of lecturer's notes, to help encourage newly qualified teachers to use television programmes.

I wonder if any copies of this film might have survived as an example of early Look and Read?

Share
Retrieved from "https://www.broadcastforschools.co.uk/mediawiki/index.php?title=Look_and_Read/Bob_and_Carol_Look_for_Treasure&oldid=49535"
Categories:
Cookies help this website deliver its services. By using these services, you agree to the use of cookies.
History
Browse propertiesCite this pagePage informationPermanent linkPrintable versionSpecial pagesRelated changesWhat links hereRecent changes