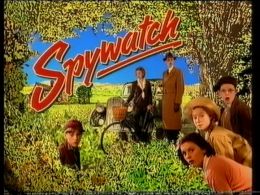 Spywatch is a unit of the BBC schools TV series Look and Read from the 1990s and 2000s, covering Language and Reading for primary school pupils.

This page about the Look and Read story Spywatch is not yet finished.
But you can still read my old web pages about the story at the Internet Archive Wayback Machine on this link:
Look and Read.myby.co.uk - Spywatch

The story bits are skillfully balanced with the in-between bits, and both segments share the main narrative: In modern times (the in-between bits) 60-something Norman Starkey returns to the village to which he was evacuated in the Second World War, and writes the story of his previous adventures with the help of the librarian, Miss Lee. These adventures (the story bits) involve Starkey and two other evacuees, Dennis and Mary, plus a local girl called Polly. Between them they have to keep Polly's gran's farm running in tough times, and keep out of the way of the bullying owner of the local Hall and his strange housekeeper. They think they're on the trail of spies when a suspicious-looking woman arrives in the village, but also have to deal with prisoners-of-war, downed enemy pilots, rationing and the black market.

Also in the in-between bits was Professor C. D. Rom, a computer program whose grammar knowhow and arrogance was more than a little reminiscent of Wordy, and some nice character-based educational songs.

Share
Retrieved from "https://www.broadcastforschools.co.uk/mediawiki/index.php?title=Look_and_Read/Spywatch&oldid=48897"
Categories:
Cookies help this website deliver its services. By using these services, you agree to the use of cookies.
History
Browse propertiesCite this pagePage informationPermanent linkPrintable versionSpecial pagesRelated changesWhat links hereRecent changes