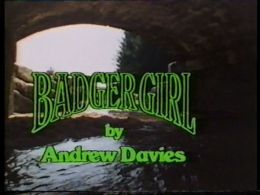 Badger Girl is a unit of the BBC schools TV series Look and Read from the 1980s, covering Language and Reading for primary school pupils.

This page about the Look and Read story Badger Girl is not yet finished.
But you can still read my old web pages about the story at the Internet Archive Wayback Machine on this link:
Look and Read.myby.co.uk - Badger Girl

Three city children go on holiday to a country farm and mess about with the wildlife, in particular a wild badger that they find in the farmyard. They stumble across a pair of crooks engaged in pony-rustling, spy on them to see what's going on, then have to come up with a way to stop it. Three grown-ups are also hanging around the moors: a wildlife photographer, a strange old hermit and the farmer's son. The kids have to decide who they can trust, and who has been helping steal the horses.

Stripey the 'superbadger' also appeared in some of the educational songs with his collection of -dg- badges, while the in-between bits featured Jane Miles, the environmentalist seen hanging about on the moors in the story, looking back through the project book Debbie made about her holiday.

Debbie and Kiran are sent off by their school on a holiday to the country, where they meet another city kid already on holiday, know-it-all Norman. Debbie gets nicknamed the Badger Girl because she has a badger-like streak through her hair. Exploring on the moor they meet the Badgerman, who used to be a scientist but has dedicated himself to conservation and become a hermit living in a hut. They also meet two men, Barker and Deal, who claim to be from the RSPCA but are actually out stealing ('rustling') ponies to sell for their meat in France.

Mick, the odd-job man from the farm, is helping Barker and Deal but he doesn't know they're slaughtering the ponies, and doesn't believe the kids when they tell him. The kids spy on the villains from a secret passage in a small church and call the police to catch them, but they get the wrong place and the police get bored and leave. The kids then try to stop Barker and Deal themselves and are captured, but eventually rescued by Stripey, their adopted badger, who beats up both of the (well-armed) villains.

Episode descriptions from the Radio Times

Share
Retrieved from "https://www.broadcastforschools.co.uk/mediawiki/index.php?title=Look_and_Read/Badger_Girl&oldid=46665"
Categories:
Cookies help this website deliver its services. By using these services, you agree to the use of cookies.
History
Browse propertiesCite this pagePage informationPermanent linkPrintable versionSpecial pagesRelated changesWhat links hereRecent changes