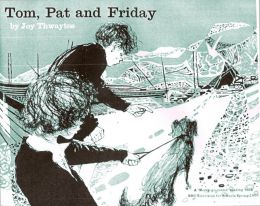 Tom, Pat and Friday is a unit of the BBC schools TV series Merry-Go-Round from the 1960s, covering Reading for primary school pupils.

This was a second experimental unit of programmes intended to help children who had started junior school but were not yet fluent readers, following the previous year's Fishing for Fivers. After this set of programmes the concept became a whole series in its own right, the popular and long-running Look and Read.

Once again there was a exciting but simple children's adventure story dramatised and told in serialised form, and teaching content in the middle of each episode so children could practice recognising words and reading out loud. The storyline concerned two children and their dog investigating the mystery of an unexplained theft, and also involved a strange man and a seaside cave. In the end it turned out that - SPOILER WARNING - a jackdaw did it!

Two children, Tom and Pat, are playing by the sea with Pat's dog Friday. Tom shows Pat a silver medal his father gave him, then they go to see their friend Jack whose father owns two boats. Jack says they can have a boat ride if they come back at two o'clock, so Pat goes to catch a bus home so she can have dinner first. On the way back after dinner, Friday chases a cat into a garden. The owner, Mrs Green, comes to tell Pat off for not looking after her dog, and when Mrs Green goes back inside she finds her ring has been stolen. As Pat and Friday are leaving they see a man up a tree, who tells them to go away.

Unfortunately Pat misses the bus, and by the time she gets back to the sea the boat has already gone out and Tom is cross with her, even after she gives him some chocolate! The children go down on to the sand, they know high tide is at 1600 hours, which Tom says is 6 o'clock. They spot a jackdaw on a cliff, and Pat thinks she saw the same bird in Mrs Green's garden. Just as Pat spots the man who was up in Mrs Green's tree, Tom realises that his silver medal has been stolen.

They decide to follow the man down the beach as even though Pat says high tide is at 4 o'clock, Tom insists it is not until six. They spot footprints in the sand which show the man went into a cave then came out again, so they go in to investigate the cave. They see the jackdaw again inside the cave and when Tom climbs the wall he finds a stash with his silver medal and Mrs Green's ring. They still think the man is the thief and are worried he will come back, but before they can get away Pat hurts her foot and can't walk.

At 4 o'clock it is high tide and the water traps the children inside the cave. Friday escapes through a hole onto the cliff and runs off past the man from Mrs Green's garden to get Jack, but Jack just tells him to go home. On the beach the man examines the children's footprints then sees them in the cave, then he runs until he meets Jack and tells him about the trapped children. Jack, Friday and the man go to the children's rescue in Jack's boat. Tom and Pat aren't so scared of the man any more but they still don't trust him.

Later they go to take the ring back to Mrs Green, and they find the man staying with her. He calls her Aunt Ellen and she calls him Bob. Bob is a birdwatcher and he was watching the jackdaw in the tree and in the cave, the jackdaw was the thief all along!

The format of the teaching sections to this story was basically the same as for the previous story Fishing for Fivers and Tom Gibbs was again the presenter. But the animations and devices used to show words on screen were changed after feedback from the previous story.

As the series was to be viewed by mixed groups of children of different ages and different reading abilities (but all "backward" from their peer group) there was a need to make sure everybody was reading off the screen at the same pace. In the earlier story they tried putting a line over each phrase in a sentence as it was meant to be read, but this caused major problems and frustration for some teachers who found it inconsistent - one education officer described the efforts as "a shambles" - and adding the overline meant the outline shape of the letters, essential for 'look and see' reading, was lost. So the idea of highlighting one phrase at a time was dropped for this story, instead viewing teachers were relied on to direct their class's reading.

The idea of inviting children to respond to questions from the presenter according to a numbered card they were given was continued, this time the cards were to be numbered 1 to 6. 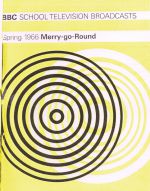 Spring 1966 teacher's notes to Merry Go Round. The story book is pictured at the top of the page.

A 16-page pupil's pamphlet containing the text of the story was published by the BBC for ninepence. It was written by Joy Thwaytes with a front cover illustration by Charles Keeping, there were no other illustrations in the pamphlet.

Four and a little bit pages in the teacher's notes for Merry Go Round in Spring 1966 were given over to the programmes, including the vocabulary lists.

All four episodes of this serial are listed as existing on BBC archive catalogue - 1, 2, 3 & 4. However, it seems to me that only Part 2 exists in its entirety, and while the filmed story segments of the other episodes have been kept by the BBC archives, the teaching segments have been lost.

Share
Retrieved from "https://www.broadcastforschools.co.uk/mediawiki/index.php?title=Merry-Go-Round/Tom,_Pat_and_Friday&oldid=49144"
Categories:
Cookies help this website deliver its services. By using these services, you agree to the use of cookies.
History
Browse propertiesCite this pagePage informationPermanent linkPrintable versionSpecial pagesRelated changesWhat links hereRecent changes