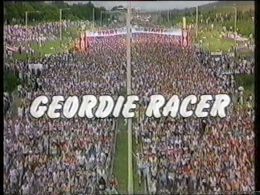 Geordie Racer is a unit of the BBC schools TV series Look and Read from the 1980s and 1990s, covering Language and Reading for primary school pupils.

Completely contemporary (to 1988) story set in Newcastle about the invigorating amateur sports of marathon running and pigeon racing, and the unsavory world of art theft, and about the Hilton family which manages to get itself embroiled in all three. Spuggy Hilton isn't a Runner like the rest of his family, but is a keen pigeon fancier and owns one of the bonniest birds in NewCAStle. He and his friend Janie observe some suspicious activity, and link a spate of local robberies with obscure messages they find on some of the pigeons, but find they have even more problems when they go to spy on the crooks.

A local radio DJ called Mickey Stone also helped Spuggy in the story and did the Wordy bits from his studio, while Derek Griffiths played a hilarious 'High-Powered DJ' in some of the songs.

Young Richard Hilton, known as Spuggy, can't be bothered with the Great North Run (a sort of mini marathon thing that the rest of his family are taking part in), preferring to spend time at the local pigeon lofts with his favourite bird, Blue Flash. He meets a pigeon trainer called Baz and spends some time in his lofts, where he gets a look at several secret messages that Baz receives by pigeon. Spuggy and his friend Janie link the messages with a series of robberies that have been taking place. Learning of the next robbery from a message, they go to spy on the robbers and Spuggy is shocked to see that his unemployed dad (Kevin Whately) is working as their driver. When Spuggy eventually talks to his dad about this, he finds that dad didn't know they were actually commiting theft, he just wanted a job.

The final, big robbery is due to take place during the Great North Run, but when Janie discovers the details she is (accidentally) imprisoned by Baz. She gets a message to Spuggy by sending off Blue Flash - who had been lost during a race and discovered by Baz, who planned to keep the bird for himself - with a message. Spuggy is able to summon the police and gets his sister to chase the villains and get their stolen money back. Well, chuck it all over the street anyway.

Share
Retrieved from "https://www.broadcastforschools.co.uk/mediawiki/index.php?title=Look_and_Read/Geordie_Racer&oldid=47418"
Categories:
Cookies help this website deliver its services. By using these services, you agree to the use of cookies.
History
Browse propertiesCite this pagePage informationPermanent linkPrintable versionSpecial pagesRelated changesWhat links hereRecent changes