Look and Read: Zzaap and the Word Master 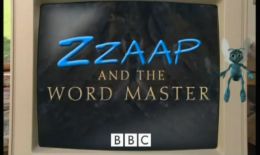 Previous unit: The Legend of the Lost KeysNext unit: Spell It Out

Zzaap and the Word Master is a unit of the BBC schools TV series Look and Read from the 2000s, covering Language and Reading for primary school pupils.

A thoroughly modern kids' drama, made deliberately without any separate teaching bits, or any songs whatsoever. Relevant bits of vocabulary do pop up on screen from time to time though, like in Captain Crimson, and the whole thrust of the storyline is jolly didactic in itself, with plenty of vocabulary and word puzzles to solve throughout. The story involves two kids, Josie and Peter, who have a go on an educational computer game in school, but get physically sucked in to the computer because the game's been hijacked by the malign Victor Virus, who wants to be unleashed onto the internet so he can take over the world. The kids then have to work their way through the levels of the game, facing various challenges - sometimes physical but mostly educational - along the way. They are helped from the real world by the school's computer technician, Simon, and Frances, another pupil.

The story is framed by scenes of the author, Berlie Doherty, actually writing it on her computer. She has a personalised Office Assistant, a blue bug called Zzaap, which comes to life and participates in the story, trying to help the children, though at first Victor persuades the kids that Zzaap is really the virus so they zap him.

The story is told in five episodes, then there's a sixth one which is all grammar and no story, just Zzaap reviewing all of the language points that we might have learned during the previous episodes - a sort of big long in-between bit. This final episode is something extra and not essential to enjoying the series, so it is often left out from repeat runs of just the story.

Share
Retrieved from "https://www.broadcastforschools.co.uk/mediawiki/index.php?title=Look_and_Read/Zzaap_and_the_Word_Master&oldid=49471"
Categories:
Cookies help this website deliver its services. By using these services, you agree to the use of cookies.
History
Browse propertiesCite this pagePage informationPermanent linkPrintable versionSpecial pagesRelated changesWhat links hereRecent changes