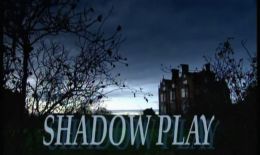 Previous unit: Spelling with the Spellits

Shadow Play is a unit of the BBC schools TV series Look and Read from the 2000s, covering Language and Reading for primary school pupils.

This page about the Look and Read story Shadow Play is not yet finished.
But you can still read my old web pages about the story at the Internet Archive Wayback Machine on this link:
Look and Read.myby.co.uk - Shadow Play

A part-historical, part-contemporary story, a bit like Spywatch. The story will start with a present-day lad on a boating holiday on the Norfolk Broads with his new step family, getting caught in a storm and sheltering in an old manor house. The lad then becomes embroiled in a Victorian plot through an old diary he finds that comes to life.

Modern lad (Ben) and Victorian diary writer (Hester) then apparently meet up and go off for an adventure in nineteenth century Norfolk, which will involve Victorian wherries (canal boats), Victorian fairgrounds, Victorian technology and inventions including the beginnings of cinema (probably developed from the camcorder that Ben has with him) and all sorts of Victorian riverside goings-on.

The carefully researched Victorian stuff and local activities like reedcutting and those wherries will help link it in to the history curriculum in schools.

Ben's coming to terms with his step family will be contrasted with Hester's rights, responsibilities and education in the Victorian period - the experiences of the past used to reflect on the present blah, blah, blah. That links it in to the citizenship curriculum.

The whole thing will be a mystery adventure serial, but in a return to the traditional Look and Read format, there will also be distinct educational segments in each episode, including songs! It was originally thought that there wouldn't be any (like Zzaap and the Word Master didn't have any) because its so difficult to find new songs that are good and catching and useful and don't end up ruining the whole thing - these criteria have apparently now been met. Anyway, that content links it in to the literacy curriculum.

Share
Retrieved from "http://www.broadcastforschools.co.uk/mediawiki/index.php?title=Look_and_Read/Shadow_Play&oldid=48786"
Categories:
Cookies help this website deliver its services. By using these services, you agree to the use of cookies.
History
Browse propertiesCite this pagePage informationPermanent linkPrintable versionSpecial pagesRelated changesWhat links hereRecent changes