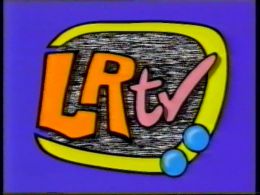 LRTV is a unit of the BBC schools TV series Look and Read from the 1990s, covering Language for primary school pupils.

This page about the Look and Read story LRTV is not yet finished.
But you can still read my old web pages about the story at the Internet Archive Wayback Machine on this link:
Look and Read.myby.co.uk - LRTV

A Look and Read Special to supplement the regular drama stories, this eschews grammatical and language-level work in favour of teaching more general writing and communication skills, and is also meant to support the Media Education scheme.

LRTV is a television station staffed entirely by children (which surely wouldn't be legal), though apparently the characters they're playing are meant to be adults. The sparse content, magazine style, and ridiculously oversized, opaque on-screen logo seem to suggest that the 'station' is more of a limited-time franchise like GMTV. Anyway the station is run by former window cleaner Crystal Clear, who seems to know what she wants but isn't very good at getting it done (the executive producer, then). The sofa-bound anchors are called Frank and Daisy and there's a regular language-skills quiz called Wordpower hosted by Lloyd B. Stickler; everything is written by Emily Penn with new recruit Joe Nas, and designed by 'Mona' Lisa; and the producer, Harmony, basically does everybody's work and makes sure everything gets done. Criminal psychopath Lester Binliner keeps trying to get himself on telly by disguising himself as various LRTV personalities after having kidnapped them or pushed them into the canal. The non-speaking Punk T. Waite is the company's general assistant, providing inadequate door security, pouring jelly over the losers on Wordpower and hosting a segment called Spelling Spot. The technician and editor, Alf A. Bett, spends his time trying to get rid of two bugs called Vin and Vern that are corrupting LRTV's computer system and providing most of the actual language-related content, stealing all the quotation marks or putting in too many exclamation points.

Note that this is the first time Look and Read had ever been broadcast in the Summer term, and the first season of the programme to have less than ten episodes. It's also the first Look and Read unit not to be made in-house by some department of the BBC, it's an independent production by Double Exposure for BBC Education.

Share
Retrieved from "https://www.broadcastforschools.co.uk/mediawiki/index.php?title=Look_and_Read/LRTV&oldid=47977"
Categories:
Cookies help this website deliver its services. By using these services, you agree to the use of cookies.
History
Browse propertiesCite this pagePage informationPermanent linkPrintable versionSpecial pagesRelated changesWhat links hereRecent changes