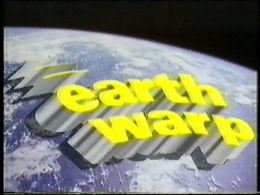 Earth Warp is a unit of the BBC schools TV series Look and Read from the 1990s, covering Language and Reading for primary school pupils.

This page about the Look and Read story Earth Warp is not yet finished.
But you can still read my old web pages about the story at the Internet Archive Wayback Machine on this link:
Look and Read.myby.co.uk - Earth Warp

Remember how everyone was all hung up on pollution and stuff in the early 90s? Well here's Look and Read reaction to that - a story involving a funny alien boy coming to Earth and helping some kids from a seaside town to put a stop to the bad pollution coming from an evil factory.

This story somewhat of an epilogue to Weeks-era Look and Read: Charles Collingwood's gone but Derek Griffiths is still around, singing and playing a Wordy-esque "language probe" in the in-between bits, which are set in a local newspaper office. There's still the old song lyrics, but the music has been altered to remove all traces of a tune and the animations have been replaced with live action cartoony sequences: they've even got an actor playing Bill the Brickie!

It's very possible that writer David Angus was a long-term Look and Read fan and purposefully hid references to earlier stories in Earth Warp... For instance, when the children first meet Ollie, a boy from space, he talks in funny beeping noises just like Peep-Peep out of The Boy From Space; the learning bits are based in a newspaper office, as were the learning bits to The King's Dragon; and one episode of the radio spin-off Space Warp revolves around a giant weather computer that could come right out of Cloud Burst (actually it couldn't - there was no weather computer in Cloud Burst, but many people seem to have the impression that there was).

A hundred years ago an alien race sent a pollution-monitoring probe to the planet Earth. In the present day the probe surfaces from the sea near Southbeach, detects the terrible pollution coming from a nearby chemical factory owned by the local fatcat Mr Belcher, and sends out a distress signal. This calls one of the aliens down to earth to investigate. He is befriended by three local children - Martin, Jenny and Amina - and reveals that Earth's atmosphere makes things from his planet be clumsy (i.e. malfunction), so he keeps falling over and the probe is going to explode and blow Southbeach up. The alien boy talks in strange beeping noises, but is able to translate his speech into English, revealing that his name is Ollie.</

In brief then: Southbeach is suffering from an outbreak of a mystery illness which is turning away clients from Martin's mum's hotel; a national newspaper journalist called Joe Lowin is investigating the illness and hears about the landing of Ollie's spaceship and sets out on his trail; the kids investigate the pollution on the beach resulting in Amina and Belcher's daughter Claire being hospitalised; Ollie has a magic glowing ball thing that he uses to revive Amina and Claire; Lowin persaudes Martin to rat-out Ollie with the promise of money to save the hotel; Martin discovers that business is actually picking up on the back of the UFO trade and repents; Ollie gets away and everybody chases him leading to a final standoff on the beach; Belcher finally realises the harm his factory's done and wrestles with Lowin and the police long enough for Ollie to deactivate the probe; everything's alright again

Episode listings from the Radio Times and other official published schedules.

Share
Retrieved from "https://www.broadcastforschools.co.uk/mediawiki/index.php?title=Look_and_Read/Earth_Warp&oldid=47121"
Categories:
Cookies help this website deliver its services. By using these services, you agree to the use of cookies.
History
Browse propertiesCite this pagePage informationPermanent linkPrintable versionSpecial pagesRelated changesWhat links hereRecent changes