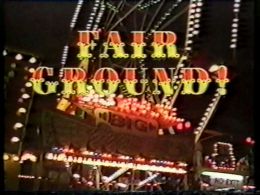 Fair Ground! is a unit of the BBC schools TV series Look and Read from the 1980s, covering Language and Reading for primary school pupils.

This page about the Look and Read story Fair Ground! is not yet finished.
But you can still read my old web pages about the story at the Internet Archive Wayback Machine on this link:
Look and Read.myby.co.uk - Fair Ground!

Screenwriter Christopher Russell's very first TV work is all about strange disturbances and crimes that take place around a travelling fair. Young Ozzie finds that there are lots of people interested in what happens at the fair - he and his mum, a smart local businessman, some grumpy old folk from the town, the hired hands from the fairground, as well as the fair owner and his daughter. One or more of them must be behind the sabotage - but which ones?

The learning bits featured (an actor playing) Martin Salisbury, who illustrated the pupil's book, in his artist's workshop just outside Thurston's Fair. Wordy spent most of his time bickering with a little mouse - also played by Charles Collingwood and Katie Hebb - that was infesting Salisbury's workshop despite his efforts to get rid of it, and the songs were given a fairground theme.

Ozzie Watson enjoys visiting the travelling fair that sets up in his town during the Easter holidays. A couple of local stuffy old people, Mr Grant and Mrs Leach, do not enjoy it and start up a petition to get it to stop coming to the town. Ozzie's mum runs the local sweet shop, where the Watsons live, and also the field where the fair sets up. A local businessman called Mr Turnbull wants to buy the field off her, but she refuses because it's the only place the fair can go and if she sold it the fair wouldn't come back. But Turnbull seems pleasant enough about it and even gives Ozzie some cash. When the fair's owner, Bert Thurston, turns up with his daughter Rachel and her parrot, Captain Cutlass, Ozzie goes along to watch them setting up the fair.

The Thurstons get a brick through their caravan window telling them to clear off and in the middle of the night someone pays off all the fair's labourers and tips up the rubbish bins. Bert is left with no 'hired hands' and has to employ two dodgy-looking blokes - Steve and Sidney - who turn up unexpectedly next morning. While he's clearing up the rubbish Ozzie discovers an envelope which contained the cash for getting rid of the labourers, addressed to "S and S" and with a bull logo on it. Then there's a set of strange incidents: on the fair's first night the power suddenly goes out, trapping Ozzie on the top of the big wheel for a bit; Rachel is kidnapped and all the sweets are stolen from the Watsons' shop.

Ozzie sees the bull logo from the envelope on Mr Turnbull's business card and goes to suss out his offices. He discovers Rachel locked in an office, along with all his mum's sweets, and they run back to the fair. At the fair Steve accidentally reveals his involvement in Rachel's kidnapping so Bert sticks him and Sidney on the big wheel until they disclose that they were hired by Turnbull. The villains are all arrested, the petition is torn up by Grant and Leach and everybody has a nice ride on the merry-go-round.

Thanks to James Taylor-Goddard for helping me finally get the character identification right.

Share
Retrieved from "https://www.broadcastforschools.co.uk/mediawiki/index.php?title=Look_and_Read/Fair_Ground!&oldid=47255"
Categories:
Cookies help this website deliver its services. By using these services, you agree to the use of cookies.
History
Browse propertiesCite this pagePage informationPermanent linkPrintable versionSpecial pagesRelated changesWhat links hereRecent changes