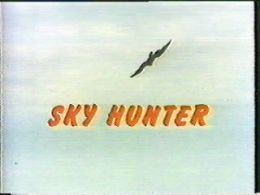 Previous story: The King's DragonNext story: The Boy From Space (1980)

Sky Hunter is a unit of the BBC schools TV series Look and Read from the 1970s and 1980s, covering Language and Reading for primary school pupils.

This page about the Look and Read story Sky Hunter is not yet finished.
But you can still read my old web pages about the story at the Internet Archive Wayback Machine on this link:
Look and Read.myby.co.uk - Sky Hunter

A classic 1970s story which, like The Boy From Space, was brought back and updated years later. This page is about the original version Sky Hunter, and there is another about Sky Hunter II.

The plot was Leonard Kingston's third and final for the series, about the illicit trade in rare birds and their eggs, and a whole load of suspicious looking grown-ups - but which are the evil bird thieves, and which are trying to stop the thieves and save the birds?

The teaching bits were all made at BBC Bristol, where Wordy was based, in the rather strange setting of "Wordy's Word Workshop", full of massive books including a huge prop of the pupil's pamphlet, which for some reason was coloured green where the real printed ones were blue. His co-presenter was a moustached version of schools TV stalwart Michael Maynard, off of Scene, English File, You and Me and probably loads of other things too.

Three kids - Jackie, Butch and Trevor - holiday on a boat on the Regent's Canal in London. They spot a peregrine falcon (which was a rare bird at the time) flying about and also meet a pair of daft crooks who're trying to nab it. They confide in their friend Mr Trim, who runs a local junk shop, and together they go to investigate. Unfortunately Trim turns out to be the mastermind behind the illegal bird trade in the area, and he joins in the falcon plot with the others - a butch bloke called Badger and a woman called Cat Mary. The only threat to their plan is another dodgy-looking bloke, whom the children dub The Birdman because they reckon he's the thief.

The Birdman is keeping the real villains' house under observation, so Trim and co inveigle the kids into sending a coded telegram to Trim's buyer. The kids crack the code and realise what's going on, but when they go to check out Trim's shop Jackie is caught. The Birdman helps the two lads get away, and reveals himself to actually be an RSPB Investigator on the trail of Badger, Mary and Trim. Butch and Trevor find a secret message from Jackie and set off towards London Zoo, where the crooks are planning to steal another falcon since theirs escaped. They beat up Mr Trim, who repents and promises to help them catch the other crooks. It looks like he's really betrayed the kids but he comes through in the end, the crooks are arrested - including Trim - and Jackie is rescued.

Share
Retrieved from "https://www.broadcastforschools.co.uk/mediawiki/index.php?title=Look_and_Read/Sky_Hunter&oldid=48817"
Categories:
Cookies help this website deliver its services. By using these services, you agree to the use of cookies.
History
Browse propertiesCite this pagePage informationPermanent linkPrintable versionSpecial pagesRelated changesWhat links hereRecent changes