This page is about the original, black-and-white version of The Boy from Space broadcast in the early 1970s. There is also a completely separate episode guide to the revised 1980s version of this episode, which is available on DVD.

The studio sequences for each episode were recorded one at a time in BBC Television Centre studio TC5, at the time the dedicated schools television studio, on Fridays two and a half weeks prior to the first broadcast.

The pre-prepared, filmed story segments and animations were played in and recorded onto videotape alongside the studio presenter sequences and the live caption overlays. Charles recorded his narration lines on the day too, to be mixed into the film story. Video recordings of the complete episodes were then edited down to time a little over a week later.

This original 1970s version of The Boy from Space is 'lost,' meaning that no recordings of any complete programmes are known to exist, and it has been half a century since they were last broadcast.

Look and Read programmes at this time consisted of a filmed story shown in two parts around a studio-based teaching segment recorded on videotape, including some filmed animation segments. The BBC archive retains some film including the original drama sequences - although the film negative was apparently re-cut in 1979 in preparation for the shortened 1980s broadcasts - and likely some of the animation sequences, but there are no remnants of the teaching segments or edited final versions of the programmes.

This guide to the series is based on as much surviving records as I have been able to trace. The BBC Written Archives Centre has been extremely helpful, but when I visited in 2014 they could not provide any production documentation for this version of the programme. They do hold a file of papers belonging to the musician Paddy Kingsland on the 1980s version of The Boy from Space, which have informed the separate guide to the 1980s production. These papers hold some tantalising references to the content of the 1970s version as the later production team considered what had come before whilst making their own decisions about the title sequence, film edits and teaching content. 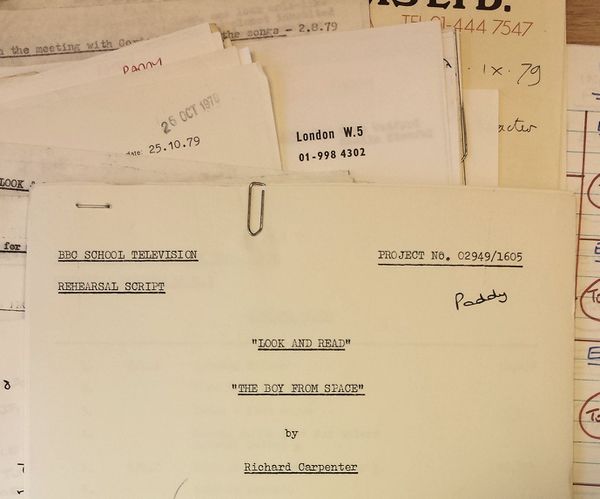 The Written Archives Centre also holds a microfilmed, chronological record of the scripts to all TV broadcasts, and these provide a written record of what was shown. The scripts are held in two separate collections, one for features and the other for drama, and Look and Read is filed in the features category - the script on file is for the studio recording of the teaching segments only. It does not cover the drama story or any other pre-recorded parts of the programmes such as the animations on words and phonics. I was assured that Look and Read does not feature in the drama scripts collection, and so the scripts to the main, story content of each episode are not available.

This is particularly frustrating in the case of The Boy from Space since the distorted 'space-speech' of the aliens in the story was all scripted and spoken by the actors, and precious little remains to help us make sense of it now. Luckily (and the reason that I'm sure the space-speech was coherently scripted) some key extracts from the drama script are included in the studio scripts when they were used as part of the teaching content, and so we do have some dialogue from episode 1 to compare with the 1980 version to understand the shortening and restructuring of the drama segments, and crucially some dialogue from episode 4 which includes Peep-peep talking to the children and using the thin space-man's actual alien name, which is not a standard English word and so not a word anyone could recognise from simply playing the audio backwards.

Interpreting the distorted dialogue is aided by the reading of the story which was released on LP record in 1972 (and is included on the BFI DVD), as it includes some newly recorded snippets of space-speech which are far less distorted than the TV version and relatively easy to understand when played backwards. Although only short extracts these help to clarify some of the words spoken on TV. 'Translations' of the space-speech using all of these sources are provided in the separate guide to the 1980 production.

A very helpful element is that the teaching scripts kept on microfilm by the BBC are the copies belonging to the producer's assistant and actually used during recording, and so they are fully annotated with timings of each segment from rehearsals and recording and with amendments made to the script on the day, to add jokes or remove content for timing reasons. This is not always the case and other BBC scripts kept on file, including for the 1980 version of The Boy from Space, are often just the typed camera scripts without annotations.

Another useful reference point for the teaching content and intent of the episodes is the booklet of teacher's notes published to accompany the original broadcasts. Reference copies of these booklets are no longer held by the BBC, but I consulted the ex-BBC Library collection in 2007 when it was kept by the University of London Institute of Education - I believe it has since moved to the British Library. The Look and Read teacher's notes in the early 1970s focus on phonic content and classroom activity suggestions, and it was not until the end of the decade that notes for the series began to include detailed descriptions of the television programme content. However the lists of phonic teaching points and in particular the practical activity suggestions match up with the content covered in the scripts, and in some cases reveal things which are not covered in the scripts. The scripts cover material that the studio team would need to know on the day of recording, but omit areas like the content of the animated films as they were already produced by then, so cross-referencing with the teacher's notes provide more explanation. For example in episode 2 there is an animation about word families and the presenter's dialogue refers to "word-disguises like that." The teacher's notes provide a diagram and explanation that word-disguises are "hat shapes which can be used over word cards, to 'disguise' the initial letters, and thereby emphasize the word family."

A pupil's pamphlet containing the simplified text of the story to be read by children was also published (in both an original and revised edition, as explained in the Resources guide) and this provides some further information about the specific form of this 1971 production. When the film was re-edited in 1980 several of the mid-episode cliffhanger breaks were moved to a different point in the action, often removing the dramatic cliffhanger in the process and allowing the 1980 teaching sections surrounding the story to cover different material. Sometimes the scripts make clear where this break fell, but in all cases a 'punctuation' of three small space-ship pictures is used in the 1970s pupil's pamphlet at the point where the mid-episode break was placed in this version of the story.

These extra published sources are especially useful because I was not able to consult all of the original scripts during my visit to the Written Archives, and I have not seen the scripts to episode 7, 9 or 10 of this production - however the teacher's notes and pupil's pamphlets, proven to be accurate on all other episodes, provide useful insight into those remaining episodes too.

Finally the BBC Written Archives also keep microfilmed, chronological records of the copyright details and timings of all broadcasts, documentation sometimes referred to as 'programme as transmitted,' 'programme as broadcast' or 'PasB' logs. For this version of The Boy from Space the 'PasB' logs provide some additional credits not otherwise available, for example the list of people 'taking part' provides some insight into the voices used for animated films and cartoon characters such as the space-bug from episodes 2 and 8, though they do not specify who played which part and they are only credited against the first episode. They also provide the durations of specially shot BBC 16mm film used in each episode, expressed in the physical feet of film used, both sound film (i.e. the film story) and silent film (i.e. the animation sequences, which were voiced either live in the studio or from audio tape), and of 'Radiophonic Music'. The timings can be cross-referenced with the scripts to confirm the length of the original film story, and how much editing must have been required to bring the length of the recorded episode down to the duration of the transmission. The 'PasB' film length and the duration of the film recorded in the script are usually within 10 seconds of each other, and so the PasB timings can generally be relied upon where timings are not available from the scripts.

In a few cases the PasB film timings are implausible, for example the records for episode 3 note 516 feet of sound film and 124 feet of silent film, which if played back in full at normal speed would take over 17 minutes of the 20 minute Look and Read programme leaving almost no time for the extensive studio material. This may reflect that more film was prepared than was actually used in the final, edited programme or that some film consisted of captions run at the same time as other film, but it is clearly not the total duration of film segments in the final programme. So this information is treated with some caution.

Retrieved from "https://www.broadcastforschools.co.uk/mediawiki/index.php?title=Look_and_Read/The_Boy_from_Space_(1971)/Episode_Guide&oldid=51311"
Category:
Cookies help this website deliver its services. By using these services, you agree to the use of cookies.
History
Browse propertiesCite this pagePage informationPermanent linkPrintable versionSpecial pagesRelated changesWhat links hereRecent changes