Look and Read: The King's Dragon 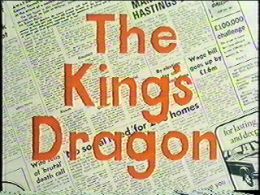 The King's Dragon is a unit of the BBC schools TV series Look and Read from the 1970s, covering Language and Reading for primary school pupils.

Newspapers, archaeology and the history of Hastings feature in this story about baddies chasing after an ancient treasure that may or may not have been uncovered. A young newspaper reporter and the grandson of a local fisherman solve secret messages and face unfriendly archaeologists while trying to work out who is issuing all the threats, and whom they're aimed at. The learning bits were presented by the newspaper editor, Jack Dunbar, and much fuss was made about local weekly newspapers - kids were encouraged to create their own for the classroom.

Billy West is the young grandson of a Hastings fisherman, Stan West, who discovers some threatening messages cut out of newspapers. With the help of a journalist from the local paper, Ann Mills, he discovers that the messages are targeted at an archaeologist who is digging at the castle, Miss Wood. A stranger called Mr Carter arrives in the town, whose villainy is revealed by the fact that he owns a fast motorboat. Ann tries to show the threatening messages to the police but Carter nicks them from her car - and without this proof her editor won't let Ann print her story, and gets her to do a story about a museum exhibition on the Battle of Hastings instead.

Luckily the musuem's curator is able to tell her all about a lost local treasure - King Harold's golden armring, the King's Dragon - which Ann realises is what Miss Wood must've discovered. Billy snoops around Carter's boat and finds a box of gold treasurey stuff. Ann goes to Miss Wood's house but can't find her - she also fails to discover Carter who is inside searching for the King's Dragon with his criminal associate (and nephew), Clive Manning, who is also Miss Wood's assistant. Ann works out that the armring is hidden in some caves but Clive overhears her and Billy talking about it and follows Billy to the caves, where he steals the King's Dragon. Clive and Carter also kidnap Billy and take him off on their boat. Billy releases a flare to get help and falls into the sea. Carter refuses to help Billy, so Clive carries out his threat to chuck the King's Dragon overboard, then jumps over to save Billy. Carter charges off in his motorboat but gets tangled up in Stan's nets and is captured. Ann finally gets her story: King's Dragon Lost At Sea.

Jack Dunbar presented the teaching content from his office at The Hastings Times, they were set six months after the main story took place with Jack reminiscing about Ann and Billy's adventures. Jack wrote the Children's Page of the newsletter and Wordy featured in the heading to the page. He appeared to viewers whenever Jack left the office and introduced songs and games.

The theme tune was all instrumental, composed by Roger Limb.

The opening title sequence shows various shapes being torn out of The Hastings Times newspaper against a red background. First, the title Look and Read appears, then various strips rip off to form into a dragon shape. The torn-out dragon seems to breathe fire, filling the screen with red, before the newspapers return to form the title The King's Dragon. The camera then tracks down the newspapers to reveal the episode title. In the final episode, when the king's dragon arm-ring has been discovered, the arm-ring appears in the piles of newspapers. The titles were animated by Sid Sutton. 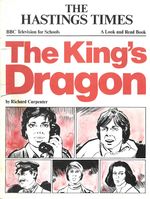 A 48-page story book containing the text of the story, as told by the Hastings Times editor Jack Dunbar. With drawings in panels like a comic strip, illustrations by Dennis Reader.

Printed in black and white, like a newspaper, except for some red printing on the cover. The front cover has a The Hastings Times masthead to make it look even more like a newspaper, and the chapter titles all look like they were ripped from newspaper headlines. 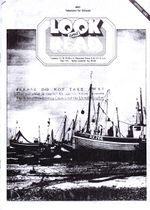 A booklet for teachers with information about each episode and suggestions for follow-up work, words and music to the phonic songs, and worksheets of picture crosswords, normal "cloze-technique" crosswords and missing-letter exercises.

Suggestions for follow-up work were credited to Bridie Raban and Cliff Moon, and on the front cover is a photograph of fishing boats at Hastings by T. H. Williams from Barnaby's Picture Library.

Full vocabulary lists, giving all of the words covered by the programme and the frequency with which they appear in each chapter of the pupil's pamphlet, were not included in the notes but were made available to teachers who sent a stamped addressed envelope to the BBC.

The picture here is from a photocopy of the 1981 notes. If anybody has a better quality picture, or a copy of the earlier notes, please get in touch by email.

A series of four radio programmes accompanied The King's Dragon, and like the programmes for the earlier story Cloud Burst they contained a reading of chapters from the pupil's pamphlet with the voices of the original characters from the TV version, plus recordings of some of the educational songs.

The radio programmes were broadcast in the autumn term specifically to be tape recorded by teachers in anticipation of the television broadcasts in the following spring term.[1]

The story was mostly filmed in Hastings in the winter of 1975. The locations seen include Hastings Castle, which Ann reaches via the West Hill Lift, and at St Clement's Caves nearby, all of which are real landmarks in the Sussex resort.

The newspaper's real printing presses are shown, but the office was a massive feature film style set at Ealing Studios in London with professional extras in the background. The editor's office part of the set was later rebuilt on its own for the recording of the teaching middles, the rest of the newsroom behind it has mysteriously vanished!

The King's Dragon is a mythical lost treasure of Hastings - a valuable golden arm-ring believed to have been worn by King Harold in the famous Battle.

While there's no real evidence that King Harold wore a dragon-shaped arm-ring at the Battle of Hastings, the inspiration for the story came from the celebrated historical novel The Golden Warrior by Hope Muntz, which describes Harold's fixation with gold ornaments. The dragon emblem was inspired by a scene in the Bayeux Tapestry in which Harold's supporters are seen holding a dragon banner. 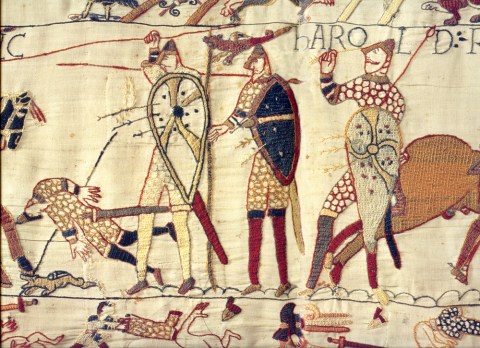 Scene from the Bayeux Tapestry showing King Harold's army fighting under the king's dragon banner, a key inspiration for this story

The original King's Dragon was designed by talented BBC sculptor John Friedlander in 1975. Two identical props were produced for the story, modelled from resin and fibreglass.

The climax of the story calls for the arm-ring to be thrown into the English Channel and lost at sea. However, the underwater scenes were actually filmed in the pool at Crystal Palace, so luckily the genuine props survived this fate. In fact, both survived until the teaching sections were filmed in early 1976, though one was later mysteriously snapped in half.

In 1986 Neil Lucas, a fan of the story and the arm-ring in particular, reproduced a model of the King's Dragon. Later a small run of these models was made available to other fans of the story.

This new reproduction of the arm-rings was developed by Neil Lucas after careful and detailed viewing of the television episodes, and with reference to the original surviving prop which was also restored.

The new models were authentically sculpted from resin, painted with liquid leaf and finished with gold leaf. They could genuinely be worn as arm-rings, as King Harold is believed to have done, and as several characters are seen doing in the story!

A limited run of just twenty arm-rings was produced, each to supplied in a deluxe black presentation box lined with ruby taffeta and an individual certificate of authenticity. The suggested price was £49.00 plus £6.00 UK postage & packing.

Share
Retrieved from "https://www.broadcastforschools.co.uk/mediawiki/index.php?title=Look_and_Read/The_King%27s_Dragon&oldid=47808"
Categories:
Cookies help this website deliver its services. By using these services, you agree to the use of cookies.
History
Browse propertiesCite this pagePage informationPermanent linkPrintable versionSpecial pagesRelated changesWhat links hereRecent changes