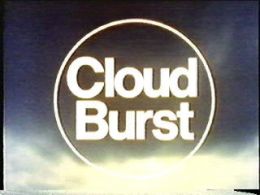 Cloud Burst is a unit of the BBC schools TV series Look and Read from the 1970s, covering Language and Reading for primary school pupils.

Look and Read's golden era begins with this classic cautionery tale, the first under producer Sue Weeks - drafted in at quite short notice to begin work on the series she would guide for the next 18 years.

Three great Look and Read staples were introduced in this story - the teaching segments introduce a funny little orange man called Wordy; the lead singer for the first time is Derek Griffiths; and each episode is introduced by the famous "Look and Read Eyes" animation ending with the programme's logo displayed in a large circle, which would also last for the next 18 years.

Some of the teaching content was dismissed as "ponderous and less than memorable"[1] even when the series was first shown in 1974, but the thrilling adventure story is filmed in such an ambitious and visually interesting way that Cloud Burst is a viewers' favourite.

Two kids go looking for their crashed toy plane on the fens and meet a foreign scientist - Ram Pandit - who is working on a secret invention. The kids step in to help when some baddies, including one very familiar face, resort to subterfuge and kidnapping in their attempts to get hold of the invention.

A more detailed guide to the story - giving away the whole plot including the ending - can be read in the episode listings below.

Thematically the story considers the idea that technology could be used for good or evil purposes, as Ram Pandit wants to use his rain-gun to make land fertile in India and feed the starving, and Ravi Pandit wants to use his rain-gun to destroy the Fens and hold Britain to ransom. In an interview years later the writer Richard Carpenter said that he "was getting at nuclear energy, really."[2]

The story's author Richard Carpenter, also a seasoned actor and regular presenter of Merry Go Round programmes, introduces the story from his study. He has a television screen (actually a prop done with back projection) on which to watch clips from the film and documentaries. He also has a typewriter where a little orange man called Mr Watchword, or Wordy for short, lives. 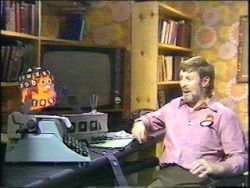 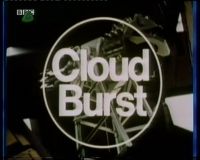 The rain gun in the title sequence

The theme tune is an all instrumental composition by Roger Limb of the BBC Radiophonic Workshops.

In the title sequence, the newly introduced Look And Read Eyes fade into the disc of the sun and images of desert and dry earth. A clap of thunder, accompanied by the 'Cloud Burst' caption, is followed by rainfall and crops growing from the earth and rapidly multiplying. Everything is accomplished with sequences of still images.

From episode seven onwards, once the rain-gun has been revealed, the gun is included in the sequence, pointing up towards the sky where it has started to rain.

The closing titles generally had a reprise of the theme tune, but in episodes 2, 4 and 7 we hear the hum of Ram's giant computer at work instead. This makes sense in episodes 2 and 4, which end in Ram's laboratory, but is curious at the end of episode 7 which ends in the quiet country lane outside the lab. 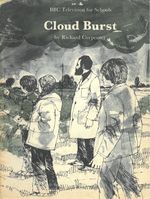 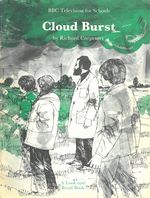 A 48-page pamphlet containing the text of the story for children to read themselves, printed in green and black, with illustrations by Trevor Ridley.

This was the "book of the film", but in Look and Read's case it is more accurate to think the other way around - the reading is the most important thing, so the television programme is the "film of the book"[3]!

For the first time the pamphlet was a pure storybook, and did not contain extra activities for children to attempt after each episode, as earlier Look and Read pamphlets did. The move from workbook to story book was deliberate and was mentioned in the teacher's notes[4]. For one thing it meant that teachers could now reuse the pamphlets from year to year if they wished, as children were not expected to write in them.

The story is told by various characters including Jenny, Tim and - when we witness the secret activities of the criminals - by Number One. The writer occasionally interjects to move the story on, and his sections are printed in green. This was to help introduce the concept of narration to children, which was explained in the teacher's notes and was one of the key things teachers were asked to report back to the producers about, specifically "do the children find that the pupils' pamphlet is clearly laid out? Are they able to understand the change of narrator?"[5]

There was a significant problem with the first printing of the pamphlet in 1974 - the green printing was extremely dark and practically indistinguishable from the black print. This meant that the pictures looked less interesting, it was very hard to tell when the writer's text - meant to be identifiable in green type - began, and some text such as "A Look and Read Book" on the front cover was completely illegible. The next editions, from 1975 onwards, used a much lighter and nicer shade of green, and the text on the cover was redesigned so that it could be read. 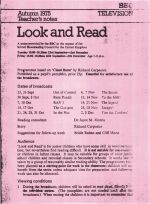 A 40-page booklet with a pink-coloured, cardboard cover, giving context information about the story, hints about the linguistic content of each episode and detailed suggestions for follow-up work.

There were many elaborate crosswords included in the notes, including several picture crosswords like those shown in the teaching segments of the TV episodes.

The notes for programme 3 included details plans to build your own word building computer, as used extensively throughout the programmes, from an old shoe box.

For the first time the notes also included full lyrics to the educational songs featured in the episodes, which could be duplicated and given out to children, especially useful when they were listening to the radio recordings of the songs without the animations from the TV episodes to help them understand.

Also for the first time, the notes did not include full vocabulary lists noting the frequency of use of every word throughout the story - these had been a common feature of all earlier Look and Read teacher's notes. Instead, teacher's were able to send in a stamped addressed envelope to be sent the vocabulary lists separately.

The notes were strongly praised in a general review of Cloud Burst in the Times Educational Supplement: "thoughtful and realistic, and particularly helpful for teachers who have not previously worked with children with reading problems."[1]

Suggestions for follow-up work were credited to Bridie Raban and Cliff Moon.

A leaflet with pictures and instructions for making the word-watcher button, a "Cloud Burst" mug, badges, model rain-guns and more[6] was shown by Richard in episode 6. Teachers were invited to send a large stamped addressed envelope to the address given in the teacher's notes (BBC School Television, Villiers House, London W5 2PA) to obtain a free copy.

The response to this offer was overwhelming. Thousands of requests were received, all of which had to be handled personally by the Look and Read production office, and the sheets duplicated on the office photocopier. The response was in fact so massive that they were later asked to edit out this sequence for repeat screenings.

I do not have a copy of the leaflet, so if you do and you can provide a scan or copy, or just describe the contents in more detail, please get in touch by email.

Information about the radio programmes from a termly wallchart

Whilst the earlier story The Boy From Space had issued a cast recording of the story book on LP, the idea was extended here and Cloud Burst was the first story to be accompanied by its own radio programmes. The programmes were designed to be tape recorded by teachers and used in the classroom in short segments.

The radio programmes contained a reading of the story by the actors in role, and replays of several of the phonic songs. It wasn't always possible to read all the the assigned chapters within one radio programme, so they just started from the beginning and kept going as far as possible before the programme ended.

They were repeated in the same pattern in subsequent years that Cloud Burst was shown on TV.

Production of Cloud Burst began shortly after the completion of Joe and the Sheep Rustlers, when Richard Carpenter was hired to provide a new story for the series. He was not briefed on a specific theme or topic to write about, and the story was also given a new producer who had not worked on the series previously, so finding the inspiration for a plot was a major initial labour.

The producer and writer spent a lot of time thinking and driving around near Carpenter's childhood home in Norfolk, until he eventually pieced together the elements of a story based in the area. Carpenter then went to work on a script and pupil's story book, which was meticulously edited by hand to ensure that every single word and every piece of punctuation occurred the correct number of times in the correct places, and the vocabulary was limited to the 250 Key Words to Literacy and other necessary plot-words only. With this early work complete, production itself began in the spring of 1974. 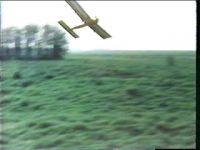 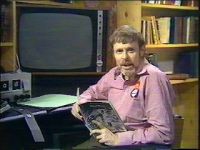 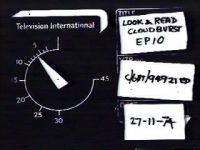 All dates and details here are taken from private sources and unreliable records (apart from broadcast information, obviously, which is taken from published sources) and is neither complete nor necessarily correct. I have not had any access to any internal BBC paperwork in compiling this list - so if anybody has any more information or can corroborate or refute any of this stuff, please get in touch.

Share
Retrieved from "https://www.broadcastforschools.co.uk/mediawiki/index.php?title=Look_and_Read/Cloud_Burst&oldid=46901"
Categories:
Cookies help this website deliver its services. By using these services, you agree to the use of cookies.
History
Browse propertiesCite this pagePage informationPermanent linkPrintable versionSpecial pagesRelated changesWhat links hereRecent changes