Look and Read: The Legend of the Lost Keys 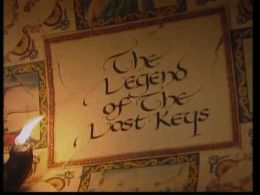 The Legend of the Lost Keys is a unit of the BBC schools TV series Look and Read from the 1990s and 2000s, covering Language and Reading for primary school pupils.

A passive re-invention of the Look and Read formula, that maintains the classic structure of episodes but does something that hadn't yet been managed in the programme's thirty year history: it seemlessly blends the teaching bits in with the story bit. The storyline is about twins on holiday with their uncle George, who discover that this uncle is descended from another world and is guardian of the gateway between this other world - Heritron - and the Earth, in the form of a mysterious old box. When some scientists come and take away the box, George realises that the evil rulers of the other world are trying to open up the gateway, which would allow them to come through and enslave Earth's children. He and the twins have to get the box back, find the three ancient keys which work it, and seal off the other world permanently. They are aided by two surviving rebels from Heritron living in secret in an abandoned shop, who use an old prophecy called the Legend of the Lost Keys to give guidance and advice. This prophecy comes in the form of various riddles and poems, one of which must conveniently be solved in the middle of each episode - they form the teaching bits.

Twins Mark and Lisa go to spend their annual holiday with their Uncle George, when they are disturbed by tycoon Sir Derek Janus and two scientists, Waters and Burns, who've got a court order to break into an ancient building on George's land and rob off with an old box that they find there. George then reveals himself to be descended from another world, Heritron, whose inhabitants are called Takers, and who used to send Catchers to kidnap Earth children to use as slaves on Heritron. This also means he has powers of telekinesis. Ages ago a rebellious Taker had closed the box thing, which is the gateway between Heritron and Earth, and George as his descendant is now the Guardian of the gateway.

There's this ancient Heritron prophecy which says that in order to permanently save Earth from the Catchers the box must be opened using three special keys and then closed again by the 'Children of Heritron', who turn out to be Mark and Lisa. There are still several Watchers from Heritron on Earth who are trying to open the gateway. Janus is the chief of them, Burns is also one and in a plot twist George's housekeeper Erica transpires to be one too.

The twins go and find the three keys, beginning to use their own powers of telekinesis. Janus soon nicks the box off of Professor Waters, who had been studying it and is just a normal Earth bloke, along with the three keys, but Waters gets the police to help him get everything back. George opens the box but can't close it again. Consulting two other Heritron rebels on Earth, Anna and Ariana, he discovers that someone has to go through the tunnel and lock the door on that end. George goes through but is captured.

The children, after nearly being abducted by Erica but rescued by Waters, go through after him, rescue him with their mind powers and then lock the door. The connection between Heritron and Earth is severed forever, the box disintegrates and everyone returns to their normal lives.

Share
Retrieved from "https://www.broadcastforschools.co.uk/mediawiki/index.php?title=Look_and_Read/The_Legend_of_the_Lost_Keys&oldid=47832"
Categories:
Cookies help this website deliver its services. By using these services, you agree to the use of cookies.
History
Browse propertiesCite this pagePage informationPermanent linkPrintable versionSpecial pagesRelated changesWhat links hereRecent changes