Look and Read: Through the Dragon's Eye 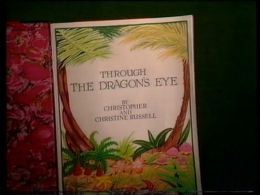 Through the Dragon's Eye is a unit of the BBC schools TV series Look and Read from the 1980s, 1990s and 2000s, covering Language and Reading for primary school pupils.

Developing the trend of having more involved stories in Look and Read throughout the 80s, this series finally did away with Wordy, along with the whole concept of separate learning bits. Instead, we get almost the entire programme taken up with telling the story, with just one quick song in the middle.

The story itself was all-out fantasy, with three kids pulled into a mural they'd painted in their playground and asked to help save the dying land of Pelamar by retrieving the missing parts of its mysterious power source, the Veetacore. This involves a lot of trying to read difficult passages, and charging off round the neighbouring country of Widge, inhabited by the horrible furry little Widgets. The children are lead and helped by a flying dragon called Gorwen and a big talking mouse called Rodey (who inherited the arrogance and the voice - Charles Collingwood's - of Wordy). Until they succeed, Pelamar turns increasingly barren and its inhabitants just fade away to nothing. The situation is further complicated by the big baddie Charn, who wants to hijack the Veetacore for his own evil purposes.

The story, by the way, seems to owe a great deal to the Chronicles of Narnia: Gorwen is Aslan, obviously, and Charn was the name of that dead world that Digory and that girl rescued that woman from in The Magician's Nephew. Well I can't really remember much about the book, but that world was definitely called Charn. Also, notice the large number of former Look and Read cast members reunited here: Charles Collingwood, as mentioned above, plus Dark Towers and Fair Ground! narrator Sean Barrett doing Gorwen's voice, and David Collings in his third Look and Read role (following twin appearances in Dark Towers) as Charn.

Episode descriptions from the Radio Times

Share
Retrieved from "https://www.broadcastforschools.co.uk/mediawiki/index.php?title=Look_and_Read/Through_the_Dragon%27s_Eye&oldid=49109"
Categories:
Cookies help this website deliver its services. By using these services, you agree to the use of cookies.
History
Browse propertiesCite this pagePage informationPermanent linkPrintable versionSpecial pagesRelated changesWhat links hereRecent changes