Dan and Helen return to their hut in the morning and use a map and a compass to work out that the bright light fell north-west of them.

They explore a wood in that direction and find that the birds have stopped singing and the compass needle is spinning round. Frightened, they flee the wood and arrive at the side of an old sand-pit.

The compass is working again and Dan finds that the sand-pit is to the north-west.

Cosmo has found a 'What Happened' board game amongst Wordy's stuff, with several circles showing -ed which can be covered with a player's discs when they say a word ending in -ed while recapping the story.

Wordy sulks when he doesn't win the game and has a think-up about the oldest traveller in the universe...

Let me tell you what happened to me,
How it all happened with -ed.

Wordy plays the song again with missing words for viewers to read for themselves.

Cosmo is hungry and finds a very old sandwich in his bag, while Wordy puts on a pair of dark glasses to take a nap. The spacelab starts spinning out of control and Cosmo presses some of Wordy's buttons to correct it. Wordy wants to know what he is doing, but with his mouth full Cosmo makes his answer appear in writing on the screen, "I could but would I?" Wordy is annoyed that the message is so difficult as there are no clues to work out how to say the words.

SongA Song About Clueless Words (would, could & should)

Cosmo finds a large compass in Wordy's stuff, and explains how the points can be read, including north-west. He introduces a film showing a girl guide called Elizabeth using a map and compass to find where she is.

Wordy thinks Cosmo is a know-all, and to catch him out Wordy uses a ring (similar to the writing ring used in later episodes towards the end of the story) to erase two words from the pupil's pamphlet. Cosmo uses context cues to fill them in, and checks he has them right by showing the text on the screen - moving into the reading part of the episode.

Dan and Helen look round the desolate sand-pit and hear some unearthly beeping noises which they can't make out.

Space-speech translator
A short extract from the soundtrack of the episode, with all of the "space-speech" snippets played backwards to work out what they are actually saying. Sources: episode audio reversed, LP audio reversed

A car pulls up at the top of the sand-pit, which Helen finds somehow familiar. A strange looking thin man wearing a mac and hat gets out of the car and strides towards the children looking stern and angry.

As they turn to flee the thin man gestures for them to leave and chases after them. They run away, but Dan falls over as the man closes in. 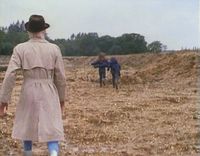 The thin man chasing the children

In the 1971 version of this episode the children have heard Peep-peep's strange speech sounds before the teaching middle and the presenter talks to the audience about them. In this 1980 version the mid-episode break has been moved and the first alien noises are not heard until the second part of the story (see the guide to the 1971 version of this episode for more details of these changes). However Wordy has obviously not been informed of the re-editing, as at the start of the teaching middle to this 1980 production he asks Cosmo "what do you think that noise was?" to which Cosmo responds "I haven't a clue" - and neither have the viewers!

The first part of the film story in this version actually ends with Dan looking at his compass and announcing that "the sand-pit is north west". The producers looking at the film in 1979 felt that this needed space for "dramatic thoughts" about its implications from viewers, and so asked for extra footage of the sand pit from elsewhere in the film to be added after Dan's line and a music sting to be inserted to make the point and create a cliffhanger ending.

An early draft of the teaching scripts held by the BBC Written Archives also saw Wordy interacting with his "word meaning" computer by speaking to it (in a very 21st Century way!) asking for a word with a particular meaning and reading the answer from the screen. It also saw him assembling his collection of long words - a concept ultimately cut from the series as detailed for episode 1 - onto index cards.

Read more about what was cut on the page about the 1970s episode.

Previous episode: 1: The MeteoriteNext episode: 3: The Man in the Sand-pit

Retrieved from "https://www.broadcastforschools.co.uk/mediawiki/index.php?title=Look_and_Read/The_Boy_from_Space_(1980)/Episode_2&oldid=51323"
Category:
Cookies help this website deliver its services. By using these services, you agree to the use of cookies.
History
Browse propertiesCite this pagePage informationPermanent linkPrintable versionSpecial pagesRelated changesWhat links hereRecent changes