Dan and Helen return to their hut in the morning and use a map and a compass to work out that the bright light fell north-west of them. 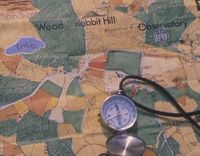 The map and the compass

They explore a wood in that direction and find that the birds have stopped singing and the compass needle is spinning round. Frightened, they flee the wood and arrive at the side of an old sand-pit.

The compass is working again and Dan finds that the sand-pit is to the north-west. Dan and Helen look round the desolate sand-pit and hear some unearthly beeping noises which they can't make out.

Charles is puzzled by what the strange sound could be too, and reviews where the children have been by looking at pictures and captions - and he checks that the captions are being used, asking viewers "you are reading the words out loud, aren't you?"

Charles has his own compass, and demonstrates how one is supposed to work using a large model in his space-room, which he turns to point north.

A small (I think cartoon, but possibly puppet) space-bug appears with a pop, which confuses Charles as there wasn't a space-bug in the sand-pit, but he reasons that "I suppose you will get space-bugs in a space-room". The cheeky space-bug refers to Charles as Charlie and is immediately put in his place. The space-bug travels along the four points of the compass to demonstrate N, S, E and W, and then disappears with another pop.

Charles calls the space-bug back to demonstrate North-West, the direction the children had travelled in the story. Having done so the bug disappears with another pop, Charles wonders where he is, then answers a telephone call where the space-bug reports that he's "gone!"

Charles introduces an animation about word families that demonstrates three words all ending in -ight, with the initial letters hidden by a hat shape and revealed to show the words 'night', 'bright' and 'light' in turn.

In the studio there is a display of similar "word-disguises" and Charles suggests that children could make their own version for the classroom. He shows another display of "word-disguises" with hats covering the start of words that end with -er and invites viewers to think of words which could be in this word family. He promises to take the hats off next week. 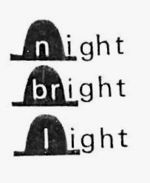 Word disguises, with hats over the first letters, from the teacher's notes

Charles sits in front of a monitor to talk about the story again with photographs from the film and captions to read including 'map,' 'North-West' and 'the needle was spinning round and round'.

He suggests children could draw their own maps of the journey that Dan and Helen took, and asks viewers to think of themselves as a bird flying over an area when they look at a map. He traces the journey from hut to wood and sand-pit on a large copy of the map. He also has a "word map" of the area showing the layout of the different features using just word cards.

There is another animation showing words with the short vowel sound -a-, ending with 'Dan', and Charles then explains that names like 'Dan' and 'Helen' start with capital letters, and explains the difference with small letters.

Finally Charles picks up his pamphlet and invites us to read from the screen what has happened.

Dan and Helen continue to wonder about the strange noises. (See the guide to the 1980 version of this episode for a translation of the space-speech they hear)

A car pulls up at the top of the sand-pit. A strange looking thin man wearing a mac and hat gets out of the car and strides towards the children looking stern and angry. As they turn to flee the thin man gestures for them to leave and chases after them. They run away, but Dan falls over as the man closes in. 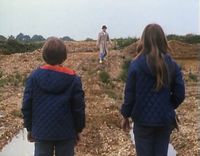 The thin man approaches the children

Thanks to the producer's assistant's copy of the script which the BBC have kept on file, we know that one of Charles's voice-over lines had to be recorded twice because there was a "slight rustle of paper" on the first take! This was his first line of narration in the second part of the film, as the kids stand at the edge of the sand-pit looking about for the source of the sound: "They did not like it. They could not see anything."

The mid-episode story break comes in a different place in the two versions of the story. Here in 1971, the children reach the sand-pit and hear Peep-peep's voice during the first part of the story. The break comes after Helen tells Dan to stop making the strange noise, which he denies doing, she asks "you didn't?" and he replies "no." Charles can then talk about the strange sounds during the teaching middle. In 1980 the break comes just as the children reach the sand-pit when they realise that it lies in the direction of the space object they saw coming down, and before they hear anything strange.

Charles' narration of the thin man lurching towards the children at the end of the 1971 episode explains clearly what is happening: "The man came towards them. They could see he was very cross. They could see he wanted them to go." In the 1980 version the gestures and action are left for viewers to interpret for themselves, and the adult Helen's narration simply refers to the thin man's first appearance as looking "very pale and strange."

The impact of the thin man's sudden appearance is different in the two versions of the story, since here in 1971 we have already encountered him in the teaser at the start of episode 1 and can recognise that he was on the space-ship - Charles talks about this in episode 3 to make sure viewers remember. But in 1980 this is our first encounter with the pale, thin stranger.

The timings of the film story in this episode:

Source: 1971 scripts; the 1971 PasB record shows 365 feet of sound film used which would be approximately 9:44, this may indicates cuts were made to the prepared film when it was played in to the episode, or may include the opening title sequence which lasted around 55 seconds; 1980 episode recordings

This is the episode which appears to have lost the most footage between the 1971 and 1980 versions of the story - fully 2 minutes of film has been trimmed out. As the story in this episode largely consists of Dan and Helen wandering around a wood in the first half, and then wandering around a quarry in the second half, it may be pragmatically the least disruptive place to trim out footage!

Previous episode: 1: The MeteoriteNext episode: 3: The Man in the Sand-pit

Retrieved from "https://www.broadcastforschools.co.uk/mediawiki/index.php?title=Look_and_Read/The_Boy_from_Space_(1971)/Episode_2&oldid=51384"
Category:
Cookies help this website deliver its services. By using these services, you agree to the use of cookies.
History
Browse propertiesCite this pagePage informationPermanent linkPrintable versionSpecial pagesRelated changesWhat links hereRecent changes