Wordy, in his space-station called Wordlab 1, welcomes viewers and puts on a video-tape of The Boy from Space Programme 1.

Adult siblings Dan and Helen drive up to an observatory to look round, and reminisce about an adventure they had there when they were children. 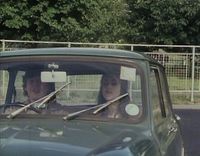 Dan and Helen driving back

Young Dan and Helen are playing in an old hut. They have built a small telescope and use it to look at the wildlife across the fields, being careful never to look at the sun.

They go to show their telescope to their older friend Tom who works at the nearby observatory. 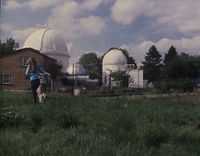 Running across the fields to the observatory

They find Tom at the observatory mending his car, and Dan notes down the number plate in his notebook for a hobby.

Tom's boss Mr Bunting comes out and is interested to look at the telescope too.

Wordy shows us his telescope, and uses it to look out of the observation window where he sees a figure in a space-suit emerging. Wordy is displeased to receive a visitor, but reluctantly allows the figure to enter. The visitor introduces himself as Cosmo, just passing through, and is immediately interested in the Boy from Space story book which Wordy has left lying about.

Wordy and Cosmo revisit the characters and the story so far. Cosmo then takes Wordy's telescope to peer out of the window, and explains how it works using lenses. Cosmo plays a video cassette he has brought with him, showing children in a classroom building their own telescopes. 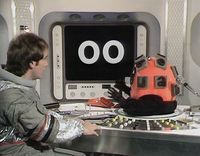 Cosmo, Wordy and an -oo-

Cosmo and Wordy are surprised by an -oo- vowel digraph appearing on their video screen, and think of words with that sound in it. Wordy thinks hard and a song animation appears.

Two stars over the wood.
One was bad, the other was good.
One had a book.
The other took a look,
And when he wasn’t looking,
She took that book!

They hear the song again with the -oo- words missing for viewers to sing along.

Wordy uses a remote controller to make a large silver hemisphere in the Wordlab rotate, revealing the Boy from Space story book inside, and we read the passage where Dan and Helen remind each other not to look at the sun through their telescope.

Mr Bunting is impressed by the telescope and invites Dan and Helen to look round his observatory. He shows them a round room with a very large reflecting telescope inside, and an even bigger refracting telescope in another room where Mr Bunting keeps a desk.

The children blink at the bright light when the roof of the telescope room is opened, and are interested in the planet map and meteorites which Mr Bunting shows to them.

That night Dan and Helen use the telescope in their hut to spot constellations. They spot a bright, fast moving object falling through the sky.

As well as that teaser, which lasted a little over 2 minutes, around 38 seconds has been trimmed from the rest of the film story, and the mid-episode break has been moved slightly to remove the cliffhanger about whether Mr Bunting would be a nice to the children or not. Read more about what was cut on the page about the 1970s episode.

The teaching section of this episode as recorded over-ran significantly, and so several linking sequences have been edited out of the finalised programme. This leaves us with some sudden juxtapositions and makes it seem perhaps slightly disjointed, with things just suddenly happening to Wordy and Cosmo for no reason. The cut material makes more sense of what they do...

The episode title used on the camera script for this episode is "Telescopes", rather than the film story's actual title "The Meteorite", which is used on-screen.