The thin man stumbles and covers his eyes giving Dan chance to get up. 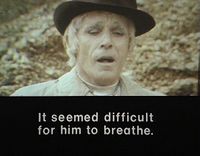 It seemed difficult for him to breathe

The children run away and hide. They see the man continuing to walk around the sandpit looking for something.

Dan sneaks over to look at the thin man's car and Helen is very worried.

Wordy and Cosmo talk about the strange thin man and look for clues in the story: he looked pale, it seemed difficult for him to breathe, and he ran in a strange way.

Wordy has floated off and Cosmo can't find him but he finds a 'word-builder' device, which is a cross between a computer and a fruit machine, and uses it to investigate compound words 'something' and 'somewhere'. 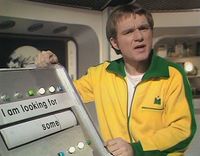 Cosmo with the word builder machine

Wordy returns, annoyed that Cosmo is taking over the Wordlab, but they work together to read some sentences from the pupil's pamphlet on screen. They talk about the sandpit in the story, which Helen thought looked like the moon. Wordy plays one of his video cassettes about human expeditions to the moon.

Wordy is amused at Cosmo's confusion over a large 'not_ book' that he finds, and introduces a song about the Magic E wizard.

SongOn a Stone All Alone (the magic e with o song)

Lyrics by Gordon Snell, music by Paddy Kingsland, sung by Derek Griffiths, adapted from a song in Sky Hunter.

A verse is played again with missing words to sing along.

Cosmo and Wordy find the missing 'e's for their 'notebooks' and then play a game of snap where they win if they spot a phrase and its elided equivalent such as 'he will' and 'he'll.' Cosmo points out the apostrophe and introduces a song about it.

Lyrics by Jean Kenward with a new example by Gordon Snell, music by Paddy Kingsland, sung by Derek Griffiths, adapted from a song in Sky Hunter.

Finally they read back in the book to see what was happening when Helen told Dan "he'll see you."

Dan notes down the number of the thin man's car in his little book. The man sees him, gets in his car and drives after him, but Dan gets away.

Chasing Dan through the quarry

After the man has left Dan and Helen compare the number plates and realise that the car the man was driving belonged to Tom, as did the mac and hat he was wearing.

Before they can tell anyone the strange sounds start again, and they see a boy slowly staggering towards them, with white hair and silver clothes and looking scared and weak.

Space-speech translator
A short extract from the soundtrack of the episode, with all of the "space-speech" snippets played backwards to work out what they are actually saying.
Sources: episode audio reversed, LP audio reversed. I am not confident about the 'under the weather' line so if anybody can provide a better interpretation please get in touch by email

Peep-Peep: Over here!
Helen: There it is again.
Dan: Come on!
Peep-Peep: Please, over here.
Helen: Dan, look!
Peep-Peep: I'm under the weather. You must help.

All of the music and sound effects for this version of The Boy from Space were provided by Paddy Kingsland… except for one. The sparkly sound effect that plays when Wordy disappears from the Wordlab at the start of the teaching section was an established bit of Wordy's presentation which was composed by Roger Limb and used first in The King's Dragon in 1977 and then again in Sky Hunter in 1978. Known as Wordy's "disappearing noise," it was obtained from Roger Limb to be re-used here.

Read more about what was cut in this version of the episode on the page about the 1970s episode.

Retrieved from "https://www.broadcastforschools.co.uk/mediawiki/index.php?title=Look_and_Read/The_Boy_from_Space_(1980)/Episode_3&oldid=51385"
Category:
Cookies help this website deliver its services. By using these services, you agree to the use of cookies.
History
Browse propertiesCite this pagePage informationPermanent linkPrintable versionSpecial pagesRelated changesWhat links hereRecent changes