On board a space-ship flying through space are two space-men and a young space-boy. One of the men is working in a small room, looking at a large rock through special eye-piece like a pair of goggles.

The space-man who was looking at the rock emerges from the room and attacks the other space-man and the space-boy, using eerie and contact-less gestures and powers.

The space-ship goes out of control and hurtles towards a planet. 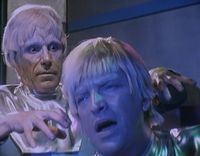 Fight on the space-ship

Young Dan and Helen are playing in an old hut. They have built a small telescope and use it to look at the wildlife across the fields, being careful never to look at the sun.

They go to show their telescope to their older friend Tom who works at the nearby observatory.

They find Tom at the observatory mending his car, and Dan notes down the number plate in his notebook for a hobby.

Tom's stern-looking boss Mr Bunting emerges and Helen looks round at him in fright. 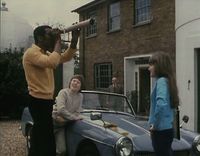 Tom looking through the telescope as Mr Bunting emerges

“Hello! I wouldn't like that to happen to me, would you? After all, Dan and Helen don't know Mr Bunting. I wonder if he'll say they shouldn't be there?

At the beginning of the story, who were those strange people? [the space-boy and his father, seated in the space-ship]

And what do you think this was? [the boy looking at the planet Mars on a viewing screen]

Was it a sort of window? Have you ever seen anything like that before on television? And what do you think the fight was all about?

What a lot of questions! We'll be finding out the answers during the next ten weeks as we watch the rest of the story.”

— Charles Collingwood, introducing the 1971 version of The Boy from Space

Charles Collingwood introduces the unit with a recap of what we have seen so far. Realising that this is a space story he decides to transform his studio into a space-room, adding star decorations, a space chair, space table and space stool, various space items on his display shelves, some lighting, and a mysterious space machine.

Charles looks at the characters we have met so far including Dan, Helen, Tom and himself Charles. Tom works at the observatory and he reveals the word a few letters at a time alongside a photograph to help us read from the screen. He does the same with the word telescope.

Viewers could make a telescope for themselves, using two cardboard tubes and three lenses and instructions from their teachers. Charles has made and decorated one of his own.

On a shelf he spots a 'tele-reader' - a cardboard tube stuck at one end to a piece of card with a hole in it. He has a word written on a piece of paper, and at a distance he can peer through the tele-reader tube to see the whole word, but as he moves closer he can just see part of the word or even just a single letter, to help sound out the word. 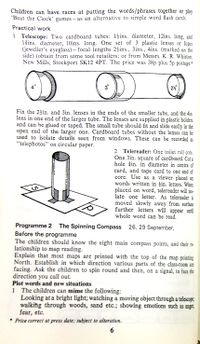 In an animated film sequence which looks like we are looking through the tele-reader, we see various words with a short -u- in them, including 'hut', 'sun' and 'gun'. The letter 'u' bounces around the screen and settles into the word 'Bunting', a character from the story.

Charles operates a control on his space-machine and sees the letter 'B', then the word 'Boy', and finally 'boy'. The machine is showing him that the letter can be written two ways but the sound is still the same. On the front of the Boy from Space pupils' pamphlet it is written with a capital letter.

He uses the machine again to find more words starting with 'b' including 'book', 'Bunting' and 'bright'.

Then it is time to read what has happened in the story and watch the next part of the film.

Mr Bunting asks the children what they are doing. When he finds out he is impressed by the telescope and invites Dan and Helen to look round his observatory. He shows them a round room with a very large reflecting telescope inside, and an even bigger refracting telescope in another room where Mr Bunting keeps a desk.

The children blink at the bright light when the roof of the telescope room is opened, and are interested in the planet map and meteorites which Mr Bunting shows to them.

That night Dan and Helen use the telescope in their hut to spot constellations. They are distracted by a bright, fast moving object falling through the sky.

Structurally this episode is quite different from the 1980 version which is available on DVD.

The most striking difference is the inclusion of the 'teaser', a dialogue-free sequence showing the space-men at work and the fight which begins the story, but without explaining what is happening so that children have to work it out for themselves. This runs directly into the title of the episode appearing on screen, 'The Meteorite', and then the normal film story with Dan running across the fields.

About 60 seconds of this sequence is shown as a flashback in the final episode, so we can still see what it was like by watching the 1980 episode, but the original teaser was 130 seconds long so quite a bit of footage has been trimmed off.

The production team of the 1980 version considered including the teaser in the updated production, but would have cut it down to 60 seconds anyway as part of a general speeding and tightening up of the story. Ultimately they decided to omit the teaser completely so that the first time 1980s viewers meet the space-men is the threatening encounter with the thin space-man in episode 2.

Instead the 1980 version of this episode starts with an introduction from Wordy and a prologue showing Dan and Helen returning to the observatory as young adults to reminisce about the rest of the story happening when they were children.

This 1971 version also has a different mid-episode cliffhanger which has been removed from the 1980 version. The first part of the film story here ends as Tom is looking through the children's telescope, then Mr Bunting emerges from the observatory and Helen looks round in fright - unsure whether the man in charge is going to welcome the children or whether they will be in trouble. In the 1980 version the look of fright has been removed, Bunting reveals himself to be nice and uses his "splendid, splendid" catchphrase, and even starts looking through the children's telescope all before the mid-episode break. Like the removal of the teaser this softens the story considerably and makes it more accessible, but this 1971 version ramps up the tension for viewers straight away.

Following the 2:10 teaser, the timings of the remainder of the original film story are:

Source: 1971 scripts, which are in close accordance for with the PasB which records 268 feet of sound film, or around 7:09; 1980 episode recordings.

This indicates that the 1971 version of the episode has about 38 seconds of additional film story which has been trimmed out of the 1980 version. I believe the trims amount to shortening long sequences like Dan running across the fields at the beginning of the story. Bear in mind that although the first part of the story is of almost the same length in both versions, the 1980 version has got through several more lines of dialogue before the break.

There is also some dialogue from Mr Bunting cut, mostly around the change in the cliffhanger while the children are outside the observatory. Here are some of the known differences, based on the dialogue in the second half of the 1971 episode which is included in the studio script. This illustrates how the 1980 version was tightened up by trimming bits rather than cutting out whole scenes, and a small part of the dialogue dubbed onto a later bit of film in 1980 to make the new structure work.

Finally, the focus of the teaching content is quite different in the two versions of this episode. In the 1980 version Wordy and Cosmo talk about the story and telescopes, but then look at words with -oo- and -ight inspired by the story. In the 1971 version Charles spends the time that he has talking about space themes and telescopes. He looks at words with -u- and the difference between small and capital letters.

He also spells out long words like "observatory", and exactly the same idea was due to be included in the 1980 version of the episode, but ultimately it was cut due to time.