The thin man stumbles and covers his eyes giving Dan chance to get up.

The children run away and hide. They see the man continuing to walk around the sandpit looking for something.

Dan wants to look at the thin man's car and Helen is very worried. 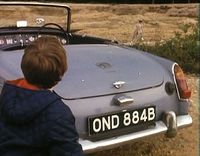 Dan wants to look at the car

Captions remind us that Dan wanted to look at the car. Charles asks what is so special about the car, have we seen it anywhere before? Have we seen the driver before? He is captioned "the thin man", and we zoom into his face and then see a short clip from the fight in the space-ship from the start of episode 1. Charles confirms that not only is it the man "who was in that fight at the beginning of the story," but that "he started it!"

We see a picture of the thin man standing in his glinting silver space-clothes, and Charles points out that they "aren't much like anything men usually wear, are they?" Furthermore "he has white hair, and yet he doesn't seem very old", and his ordinary mac and hat make it seem like he is in disguise.

Charles sits in front of the monitor and recaps the story with captions to read along. From last week, the thin man running after the children then stopping and covering his eyes, and from this week he is getting something from the car but they could not see what.

Charles then remembers the word-disguises from last week, and starts taking off the hats from the -er word display, to reveal 'number', 'silver' and 'after'.

Then he picks up the telereader and looks through it to see an animation about words with a short -o- sound, ending with 'Tom'.

'Tom' has a capital letter, as do car number plates. Charles shows how to make cardboard models of cars and lorries with simple number plates, and single letters as manufacturer's marks. On the back of the car with an 'S' mark he has written lots of words starting with that letter.

Cardboard vehicles with number plates, from the teacher's notes

An animation involves two lorry driver characters called Sid and Pete who each have a load of words stating with their initial letters, which viewers need to read from the screen. All of the initial letters disappear, having fallen off the lorries and been loaded onto space-ships. Lifting off into space the letters make words starting with the consonant blends sp- and st-.

Charles sits by the table and takes us back to the story by reading from the screen.

Dan sneaks over and notes down the number of the thin man's car in his little book. The man sees him, gets in his car and drives after him, but Dan gets away.

After the man has left Dan and Helen compare the number plates and realise that the car the man was driving belonged to Tom, as did the mac and hat he was wearing.

Before they can tell anyone the strange sounds start again, and they see a boy slowly staggering towards them, with white hair and silver clothes and looking scared and weak. 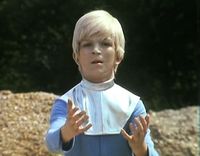 When he is talking about capital letters and car number plates Charles asks viewers "why don't you write them down like Dan does?". This line was not included in the original script and was improvised during the recording (as it has been added to the file copy of the script by hand).

It replaced a sequence from the original script in which three different car number plates were shown on screen in turn and Charles encouraged viewers to read the letters they could see out loud, before reading them out himself. This was cut from the final programme (as it has been crossed out in the file copy of the script).

The consonant blends sequence was produced in two halves. The first part involving the lorry drivers with their loads of words, and disappearing first letters, was recorded live in the studio using caption cards and moving strips of paper, and pre-recorded audio on tape. Once the words lift off into space a pre-recorded animation on film was played in, with additional captions superimposed for part of it from the studio.

The mid-episode cliff-hanger is essentially the same in both versions of this episode - Dan is riskily sneaking over to look at the car. Here in 1971 the break comes just as Helen calls him to "come back!" and in the 1980 version a little more film is shown as he moves across the sandpit and adult Helen describes how worried she felt. In 1971 there was no physical break in the film for this episode when it was played back in the studio, and they had to cut away from it at the right time. The film was then rolled back and the second part of the story picked up with a repeat of the same line from Helen.

Source: 1971 scripts; the 1971 PasB record shows 516 feet of sound film used which would be 13:46 and take up most of the episode. I don't know what all of that film could possibly be so have disregarded this number; 1980 episode recordings

The 1980 version seems to have lost about 1:41, presumably mostly footage of the children walking round the quarry - though the short sequence of repeated dialogue between the first and second parts of the story in 1971 means that the amount of footage actually lost is probably slightly less than that.

Retrieved from "https://www.broadcastforschools.co.uk/mediawiki/index.php?title=Look_and_Read/The_Boy_from_Space_(1971)/Episode_3&oldid=51383"
Category:
Cookies help this website deliver its services. By using these services, you agree to the use of cookies.
History
Browse propertiesCite this pagePage informationPermanent linkPrintable versionSpecial pagesRelated changesWhat links hereRecent changes