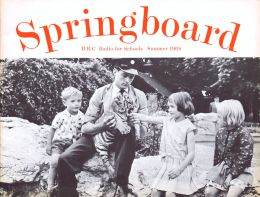 Springboard is a BBC schools radio series from the 1960s, 1970s and 1980s, covering various topics for primary school pupils.

A very wide-ranging miscellany series for junior schools, whose programmes are designed to stimulate the imaginations of listening children and inspire them to carry out topic-based classwork in the days, weeks and months after they hear the broadcast.

Programmes are arranged into units, two to five episodes long, on coherent topics, but other than this the subjects could range far and wide. Episodes in just 1965-66, the series' first year, looked at everyday objects around the house, pets, children overseas, people who entertain us, the weather, places in the street, roads, transport, gardens, Red Indians and the make-believe.

Throughout its run Springboard made occasional use of Radiovision episodes (radio programmes accompanied by a set of still pictures to be projected alongside it in the classroom via a filmstrip or slides) on diverse subjects such as Exploring the Deep (spring 1971), farm machines (Speed the Plough, spring 1977 repeated spring 1980), guide dog training (A Nose for Safety, spring 1979) and mazes (Secret Pathways, autumn 1981).

During the autumn term the series often offered the content for a Christmas play, taking listeners through rehearsals to a performance in the last broadcast before the Christmas holiday. This started in 1968 with St George and Bold Slasher, a mummers' play set up to be performed 'in the round' in the classroom with a song to the tune of God Rest Ye Merry Gentlemen. This was repeated in 1970.

1969 brought Harlequin's Hoax, a play based on characters from the Commedia del'Arte, and in 1971 the series mounted a pantomime based on The Sleeping Beauty, with the final radio performance including an appearance by then-popular radio personality Jimmy Savile.

The plays became less regular after 1972's The Cock Didn' Crow by Lesley Davies, repeated in 1974. 1976 offered the story of the Three Wise Men in They Travelled Afar, repeated in 1979.

Later in 1977 the series mounted a play on the legend of St Nicholas, but in a single programme to enjoy without lead-up and rehearsals, and the 1980 unit More Words (on which more below) included a Christmas pantomime episode called The Christmas Caper.

While most episodes of Springboard were presenter-led features, use was also made of drama and poetry. The very first Radiovision episode in the series (Mythical Animals, spring 1966) was a dramatisation by Graeme Kent of the legends of the unicorn, St George and the Dragon, and the phoenix.

In autumn 1968 the series built two programmes on Making a Collage around a commercially-available EMI "gramophone record" of The Little Tailor read by Peter Ustinov, which includes a musical suite by Tibor Harsanyi which could be used for the end-of-term mummers' play.

There were also dramatisations of scenes from children's books including The Wind in the Willows by Kenneth Graeme (Mr Badger, spring 1969), The Dolls' House by Rumer Godden (Scenes from The Dolls' House, spring 1970 repeated spring 1972), Flat Stanley by Jeff Brown and Beaverbird by Ruth Underhill (both spring 1973).

There were occasional programmes of poetry inspired by a subject, and in summer 1978 two programmes on Rocks and Islands were stories contributed by poets. Charles Causley had used Springboard regularly in his days as a teacher[1], and established as a poet he wrote the story of the Shipwreck of The Caledonia. Brian Patten's poem 'A Small Dragon' was well known in 1970s classrooms, and he created a magical story of The Isle of Mists for Springboard.

In 1970, 71, 72 & 74, the final programme in the spring term each year was given over to listening children's own work and opinions based on the programmes in the preceding autumn and spring terms, collected by during the year and selected by the producer Jenyth Worsley.

In 1973-74 one programme in each term was called This Week, and provided a topical look at "current events and odd anniversaries"[2].

Another common feature which recurred across the years is road safety. Derek Farmer and Jim Crack wrote a pair of programmes on the topic in autumn 1975. A unit on mazes in spring 1978 included a road safety programme called Street Maze designed by Dr Ken Jolly of Reading University and Christine Durow of the Road Research Laboratory[3]. A unit on Air and Water in spring 1980 also included a road safety programme called Rain for Danger.

The series had no regular presenter, and each unit or programme would be introduced separately. On occasion this allowed special guests to become involved.

An astronomy unit called Seeing Stars in autumn 1981 included an episode on The Planets narrated by Tom Baker. The programme was later sold to schools on cassette on the basis that Baker, "doubtless drawing on his wealth of experience as a one-time Dr Who, describes the structure and movement of our solar system."[5]

Behind the scenes, Vlad the Drac author Ann Jungmann wrote for the series including a story of Brer Rabbit (spring 1981), while author Punyakante Wijenaike provided an episode on Birds Came to Tea (autumn 1978).

One particular group of programmes would go on to a life far beyond the end of the Springboard series itself.

A unit on Words in spring 1979 introduced a set of characters created by Derek Farmer called Alfie Bet, Bookworm, Mr Builder and Thin King, who live in a palace and have word-related adventures.

The characters were very successful and spawned a spin-off series, Radio Thin King in spring 1980, followed by another Springboard unit of More Words in autumn 1980, and then developed into a further spin-off series, Listen and Read: Radio Thin King which would stay on air until 1987. A series of 16 reading books based on the Thin King stories was published by Longman[6].

Springboard was rarely heard in Wales, where it was replaced by Welsh-language schools programmes including Sain, Cerdd a Chan and Gair yn ei Le in the 1960s, and later in the 1970s Y Byd o'n Cwmpas.

Springboard was heard in Scotland in the 1960s, but from 1970 it was replaced by the equivalent local Scottish series From Seven to Nine, and later its replacement Jigsaw.

Share
Retrieved from "https://www.broadcastforschools.co.uk/mediawiki/index.php?title=Springboard&oldid=51247"
Categories:
Cookies help this website deliver its services. By using these services, you agree to the use of cookies.
History
Browse propertiesCite this pagePage informationPermanent linkPrintable versionSpecial pagesRelated changesWhat links hereRecent changes