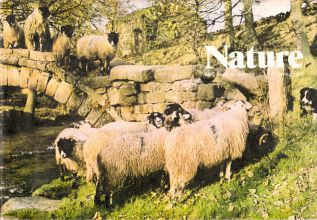 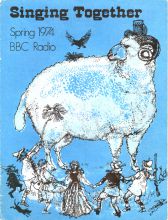 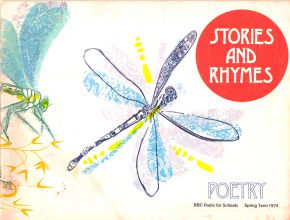 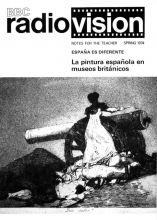 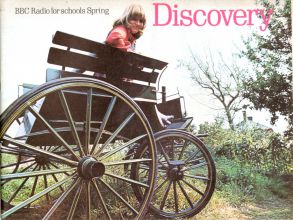 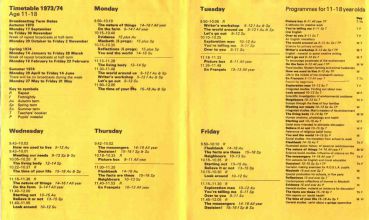 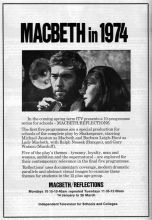 The main broadcasting term ran from Monday 14th January to Friday 29th March 1974. There were half term repeats in the week beginning 18th February 1974.

There were no schools programmes on Thursday 28th February, presumably as schools were closed for general election voting. All Thursday programmes were postponed by one week, and finished on Thursday 4th April 1974.

The series Dewch i Siarad (Let's Speak Welsh), which had previously been broadcast for schools in Wales, was broadcast for adults this term on Radio 4 Wales, at 8:15pm on Tuesday evenings.

There were schools programmes on several BBC Local Radio stations this term:

I don't know details of the actual series broadcast, and I'm not certain whether other local stations also provided a service for schools this term[1]. If you know more please get in touch by email or on the forum!

The regular broadcasting term ran from Monday 14th January to Friday 29th March 1974, with a week of half term repeats beginning on 18th February. There were no schools TV programmes on Friday 1st March, due to coverage of the general election results on BBC1. The planned schools programmes, which were almost entirely repeats, were simply dropped and the schedule resumed as planned in the following week. The missed Scene episode, All That Glitters: The Sweet was repeated after the end of term on Friday 5th April 1974.

The final afternoon schools programmes were not shown on Tuesday 12th or Wednesday 13th March. According to the Television Club teacher's notes this was done "to enable transmission of the National Hunt Festival (horse racing event) to take place," but I'm not sure exactly why, as the horse racing programmes did not start until 14:50, long after the scheduled schools programmes would have ended. For the last three weeks of term Television Club episodes were shown first on Thursday and repeated on the following Tuesday. The final Television Club episode for the term was repeated on Tuesday 2nd April. The New Horizons repeats were postponed by one week, so for the last 3 weeks of term the episode shown on Monday was repeated on Wednesday of the following week, 9 days later. The final New Horizons episode was repeated on Wednesday 3rd April 1974.

The major new series this term was You and Me - not strictly speaking a schools programme as it was aimed at 4- and 5-year-olds at home and in pre-school classes, but it was produced by the BBC Schools Television department and always sat amongst the schools programmes in the schedule. It was accompanied by a new schools radio series for the same audience - Playtime, which began in autumn 1973 and continued this term. While You and Me seems to be the better remembered of this pair, it came to an end in 1995 (or strictly speaking in 1992) while Playtime continues in the early 21st century.

The primary school miscellany series Merry-Go-Round featured a new serial play called The Raven and the Cross about the attempted Viking invasion of Saxon England. In fact, although the play was billed as new and a new book was published to accompany this transmission, it had already been produced on Merry-Go-Round in spring 1971. I understand that this original black-and-white production had been inadventently lost or deleted by the BBC by 1974, and so a new production was mounted with most of the same cast, this time filmed in colour. This version of The Raven and the Cross had a long life as, after several repeats on Merry-Go-Round it was resurrected and repeated again as part of the later miscellany series Zig Zag in autumn 1992 (when the TES expected children to enjoy it "in spite of the script which groans and squeaks with age"![2]) and these programmes were repeated by the BBC for another decade, into the early 21st century.

Outside of the schools schedules, a three-part adaptation of Tom's Midnight Garden was broadcast as part of the children's afternoon programmes on BBC1, on Mondays at 5:15pm beginning on the 7th January. This was a new, "present day" adaptation, filmed in colour, of a script written by John Tully and originally performed on Merry-Go-Round (in black and white) in autumn 1968[3]

Programmes introduced by Alex Glasgow, broadcast at 11:00 to about 12:10 each day as "a chance to preview some of the school television programmes for the spring and summer terms."

The main term ran to exactly the same schedule as the BBC, from Monday 14th January to Friday 29th March 1974, with half term repeats in the week beginning 18th February. There were no schools programmes on Thursday 28th February or Friday 1st March due to the general election. All Thursday and Friday programmes were delayed by one week and finished on 4th & 5th April 1974.

Decision! was a new series starting this term. Shown at three-weekly intervals interspersed with the established series The Messengers, it was a vocational series on decision making aimed at teenagers staying in school due to the latest raising of the school leaving age. A similar new series also began this term in Scotland - A Matter of Decision was made by Grampian Television and also shown by Scottish Television. Both Grampian and Scottish did show Granada's Decision! as well as their own series.

Thames television's production of Macbeth, first shown in autumn 1970, was repeated this term and followed by an entirely new accompanying series caled Reflections, looking at the themes of the play.

The repeat of the French-language serial Le Butin de Colombert was only partially networked, shown on Thames Television and some other stations. It was not shown by Channel Television, the broadcaster in the Channel Islands and surely the most francophile of the ITV stations. They had their own French language series, En Français.

Several regions filled in the gap in schools programmes at around 10:30-11:00am on some mornings with their own programmes. Ulster Television showed Romper Room on Mondays & Wednesdays at 10:37am. Thames showed Adventures in Words on Wednesdays.

Programmes from the term were previewed over the Christmas holidays as a service to teachers and parents.

The Inner London Education Authority's cable broadcasts to hundreds of schools in London continued this term, but I don't have any details of the specific programmes shown. If you know anything please get in touch by email or on the forum!