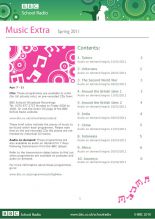 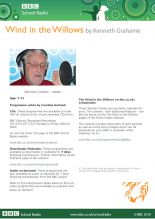 The Wind in the Willows
(Radio 4 Digital, Fridays 3:15am) 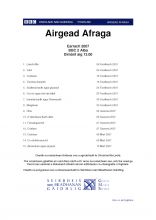 Programmes run from Tuesday 18th January to Friday 1st April 2011, with no programmes in the week beginning Tuesday 22nd February due to half term, a total of 10 weeks.

There were new episodes this term in the series Dance Workshop, Let's Move, Movement First (under it's new banner title Scottish Learners Early/1st Level), Playtime, Scottish Learners 2nd Level, Something to Think About, The Song Tree and Together.

Almost all of this term's programmes were available as podcasts, so that teachers could subscribe and download an MP3 file of each episode for up to 30 days following each broadcast. Only Dance Workshop and Music Extra were not available as podcasts at all, presumably due to problems with rights to include full music tracks in podcasts, and The Wind in the Willows (which was first broadcast a year earlier when online rights were different) was only available for 7 days following transmission. All programmes, including Dance Workshop and Music Extra, were available for listening on demand via the BBC iPlayer for 7 days following transmission.

On the final Thursday of term - 31st March 2011 - there will only be 20 minutes of actual programmes as there are only 9 episodes each of Dance Workshop and Time and Tune this term so they will both have finished in the previous week. The remaining 40 minutes will be filled up with non-programme material (presumably favourite songs from the music series and clips from this term and next term's programmes) and then the World Service will resume as normal from 4:00am. I think 40 minutes is the longest period of schools radio broadcasts with nothing actually scheduled in it that there has ever been!

Schools programmes on the Learning Zone run from Tuesday 1st February to Friday 25th March 2011, at 04:00-06:00 each day on BBC2. The weeks beginning Tuesday 15th February & Tuesday 22nd February are filled with Languages & Travel programmes for general audiences, and Tuesday 29th March the Learning Zone will be dedicated to GCSE Bitesize Revision programmes, into the summer term.

Other new programmes this term are the maths sketch show Quiff and Boot (8th March), PSHE programmes Love Hurts on safety in relationships, and Coping on mental health (both 17th March), primary cross-curriculum programme Markets (15th March) and primary English programmes Once Upon a Time and Hansel and Gretel (both 22nd March). The animated programme ©[email protected] Beware!, about a pop-band facing internet piracy and other issues, is repeated and joined by a sequel about personal finance, called [email protected] (both 21st March).

There will also be new primary schools programmes on languages (Adventures Abroad, 1st March) and non-fiction (Ways of Talking, 22nd March). For young children and nursery teachers there will be a new, second episode of Talkie Time (8th February).

There will be a new Class Clips Media Studies episode on Elections (4th March) and new GCSE Bitesize Revision episodes on English (2nd February), History and Business Studies (both 18th March). The Language and Travel programmes during the February half term will include a new Italian language series called La Mappa Misteriosa (15th February).