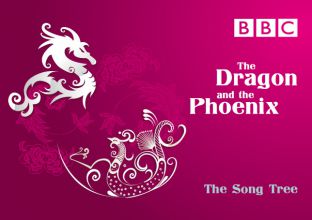 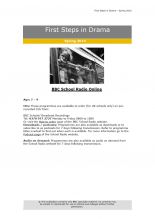 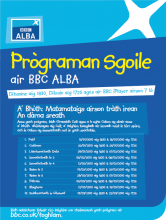 BBC Alba schedule for A' Bhùth 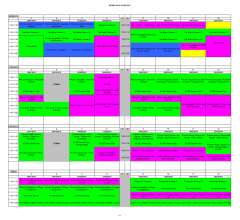 Programmes ran from Tuesday 12th January to Friday 26th March 2010, with a week off for half term beginning Tuesday 16th February, so a total of 10 weeks.

All programmes were available to listen to on the BBC School Radio website, mostly as realmedia files for 7 days following the broadcast. Several series were also available to download as podcasts, with each episode available as an MP3 file for 7 days following the broadcast: First Steps in Drama (available as a podcast for the first time), Let's Move, Listen and Play, Maths Challenge, Music Workshop, Something to Think About, The Song Tree, Time to Move, and Together.

Amongst the new programmes this term were the Scottish movement series Hop, Skip and Jump, and the collective worship series Something to Think About.

Schools radio programmes are normally broadcast on digital versions of Radio 4 broadcasts - on digital radio, satellite & cable and via the BBC website. Analogue Radio 4 broadcasts on FM continue to relay the BBC World Service during this time. On the morning of Friday 12th February 2010, the last day of school radio before the half term break, there was a fault and digital Radio 4 continued to relay the World Service at 3:00am, when it should have changed over to schools programmes. Eventually somebody flipped a switch about 7 minutes later to join the schools programmes which had apparently been merrily playing away to themselves, with nobody listening! So the first half of that day's Together episode was not broadcast on the radio, but could still be heard as a podcast and a streaming file on the School Radio website[1].

The series Far na Duilleig was repeated from summer 2008. It ran from Friday 8th January to Friday 12th March 2010 with no interruptions, a total of 10 weeks. The programme was followed by two short, long-running educational programmes: Ceud Bliandhna - about history 100 years ago - and Litir do Luchd-Ionnsachaidh - the Letter to Learners of the Scottish Gaelic language. These three programmes combined together lasted half an hour, and were broadcast first on Friday mornings at 11:30am as shown here, and then repeated at 10:30am on Saturday morning.

Programmes ran from Monday 18th January to Friday 26th March 2010, with no programmes in the weeks beginning 15th February & 22nd February due to half term, so a total of 8 weeks of broadcasts. The schedule grid shown here is a summary of the main programmes shown, there were lots of other short programmes & one-week-only programmes which can't be fitted in here.

Schools programmes were interrupted by extended live tennis coverage on Tuesday 26th & Thursday 28th January, and as usual BBC2 did not offer the Learning department any replacement time in the schedule to make up for the loss, so many programmes had to be dropped and others rearranged, and the schedule ended up far more complicated & harder to understand than had been originally planned!

Various episodes of Primary Geography, Science Clips Investigates and Something Special which had been planned for this term were all dropped from the revised schedules. On Tuesday 26th January the scheduled episode of Let's Write a Story was still shown after the end of the tennis, but it started about five minutes late and ran over into the slot normally occupied by The Daily Politics, so teachers who had set a timer recording were likely to have missed the ending.

It had originally been planned to show a strand of new one-off Media Literacy programmes on Safer Internet Day, Tuesday 9th February, but the disruption meant that the programmes had to be split up, with [email protected] Beware, about music piracy, still shown on 9th February but earlier than advertised, and a 30-minute Newsround Special: Caught in the Web, about online grooming, postponed to Thursday 11th February. A shortened, 15-minute version of the Newsround Special was still shown to children on BBC 1 and the CBBC Channel on the afternoon of 9th February.

Other new programmes this term included Being Italian on 8th February, following the series of Being Chinese, French, German and Spanish programmes shown in the Learning Zone a year earlier, and several episodes of Telling Tales shown dubbed into Italian for the first time, including one completely new episode, The Magic Fish, on 19th January.

There were two new series of Primary Class Clips, on Dance and a 2nd set of programmes on Art and Design. These were accompanied by separate new series on Primary Dance, Primary i-D&T, Primary Creative Arts, Art, Music and Dance Around the World and Who Are We?. There were two other one-off new programmes, Eon Straddler Time Traveller about the history of musical instruments and design on 9th February (rescheduled from 11th February), and L8R Youngers on 22nd March, a series of short social issues dramas for primary pupils, following the secondary school series L8R which was first shown in the Learning Zone in spring 2004.

At 11:30am on Monday 25th January an advert was first shown on BBC 2 announcing that "from next term you'll start to find all schools TV in the BBC Learning Zone," emphasising the advantages of all schools TV content being shown together overnight so that it can be recorded in one go. This was the first official announcement that daytime broadcasts of schools programmes on BBC2 would finish at the end of the spring term, and in future both primary and secondary school material would be shown overnight in the Learning Zone slot. As Channel 4 had already put an end to their schools TV broadcasts the previous term, the final ever daytime schools programme on British TV was the concluding episode of Look and Read: Captain Crimson, which finished at 12:00noon on Friday 26th March 2010.

Two Scottish Gaelic-language schools programmes originally shown on BBC2 Scotland, continuing from the autumn term. This term programmes were shown from Friday 15th January to Monday 22nd March 2010 with no breaks, a total of 10 weeks.

There were no overnight broadcasts of the Learning Zone in January or February 2010, probably because live coverage of the Winter Olympic Games was shown overnight on BBC2 during the second half of February.

For three weeks from Tuesday 2nd March 2010, secondary schools programmes were shown between 4:00am and 6:00am on Tuesday, Wednesday, Thursday and Friday mornings. Almost half of these programmes were new. There were three new episodes of Class Clips on Creative and Media, and another three on Around the World in 80 Faiths, edited from the eight-part BBC 2 primetime series first shown from 2nd January 2009.

There was a new half-hour programme called The Power of Poetry, and Talkie Time, an hour-long interactive programme for young children with Rodd Christensen from the Cbeebies series Balamory, accompanied by an introduction for teachers on how to use the programme. Another new programme, Science on the Ground, had been scheduled to be shown on the morning of Friday 19th March, but it was not shown, a repeat of Class Clips: Science 2 went out instead.

From Tuesday 23rd March various GCSE Bitesize Revision programmes were shown, all repeated from previous years. There was no interruption to the schedule for the Easter holidays, and the revision programmes continued into the summer term.

Although Channel 4 had officially ended their schools TV broadcasts in the autumn term, several of their recent secondary schools / teenage learning series were repeated in the early hours of the morning this term, on different days of the week and at different times between 4:00am and 6:00am each day, sometimes skipping days entirely.