A French-language crime serial designed for children who had already spent two or three years learning French, giving them an opportunity to hear and - crucially - understand real French in an enjoyable context.

The title Le Butin de Colombert literally means The Colombert Booty, referring to the loot from a bank robbery which has been hidden by one of the robbers in the woods at Colombert, near Calais. The story concerns Monsieur Bertrand, who runs into an old friend of his - who happens to be the aforementioned robber. Bertrand ends up going in search of the loot, and then keeping it secret from his family, the police, and another member of the bank robbing gang who is hot on his trail.

The series was a follow-up to the 1967 serial Le Mystère de Valbec, and it's storyline shares quite a lot in common with the later BBC serial La Marée et ses Secrets.

The language in the programmes is controlled but quite natural, everyday French, including some vocabulary which second or third year learners of the language could not be expected to know - not least butin (booty) - but which they could understand with the help of the TV pictures. There is repetition wherever it could be naturally included, such as when the characters place their orders in various cafés, and long periods with no speech just action and music. The scripts were "written and re-written in the conflicting interests of story line and vocabulary,"[1] but it was claimed that no particular phrases or sentence structures were included "for their own sake"[2].

The series was filmed partly on location in France, but as close to England as possible[3], with interiors recorded in the studio. The actors were all French, but instructed to speak a little slower than normal so that pupils could follow the plot - quite a challenge when trying to portray the agony of discovering your friend has been killed, or the ecstasy of discovering a life-changing amount of money, all in slow motion!

The following detailed descriptions give away the entire plot to every episode! The photographs, reproduced from the pupil's pamphlet, are in black and white, but the programmes were made in colour.

The series was first shown in the summer term of 1971, on Tuesdays at 11:40am and repeated on Thursdays at 2:40pm. It was shown across the entire ITV network, except that Border Television did not broadcasts schools programmes in the morning at this point, so viewers in the Border region did not receive the Tuesday screening.

In the annual programme guide for 1970-71, printed early in 1970, a new French serial story "along the lines of Le Mystère de Valbec" had been promised, although no details of the story were available at that stage and teachers had to wait until they received the teacher's booklet was distributed to find out what the story would be about.

It was repeated in the spring term of 1973, on Mondays at 2pm and repeated on Fridays at 10:32am, by Thames Television and also by Southern Television and Ulster Television, but not the other ITV regional companies.

There was a final repeat run in the spring term 1974, on Tuesdays at 10:30am and repeated on Fridays at 10:33am, but again only on Thames Television, Southern Television and Ulster Television.

All six episodes of the serial are listed in the Fremantle Archive Sales catalogue. Presumably these are the original master video recordings.

All 6 episodes are held on videotape by the British Film Institute according to their online catalogue.

A recording of episode 3 is held by the National Arts Education Archive as part of the Independent Television Commission collection. This is an off-air recording on Phillips tape which has been converted to VHS and is available to view at the archive in West Yorkshire. 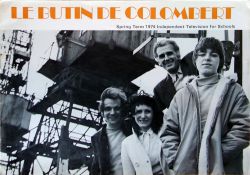 The teacher's booklet accompanying the first broadcast in Summer 1971 contained a summary of the plot to each episode, entirely in French, followed by lists of the vocabulary likely to occur - only the French vocabulary was given, not any English translations. The introduction made it clear that these notes had been written before the programmes had been made, though after the story had been written[4].

The separate pupils' pamphlet was designed to take the form of a photo-roman. It was roughly A5 in size, printed in landscape format and 16 pages long. Each double-page spread represented one episode, with four short summaries of the events of the episode and several large pictures. The original 1971 pamphlet had illustrations by 'Guy Weir, which bore little ressemblance to the actors who appeared on TV and were presumably drawn before the drama was filmed. The 1973 and 1974 versions had the same format but slightly revised text, and used black & white photographs from the production instead of illustrations.

The front covers of both publications used illustrations in 1971, but from 1973 onwards they showed a photograph of M. Bertrand, Pierre, Jeanne and a bizarrely smiling Lartiche at the Calais docks.

The name of the police inspector was evidently changed during filming. In the original 1971 publications, and cast lists published in TV Times magazine that year, the character was called Inspecteur Godillot. But in the later reprints this was changed to Inspecteur Guillot.

Share
Retrieved from "https://www.broadcastforschools.co.uk/mediawiki/index.php?title=Le_Butin_de_Colombert&oldid=46794"
Categories:
Cookies help this website deliver its services. By using these services, you agree to the use of cookies.
History
Browse propertiesCite this pagePage informationPermanent linkPrintable versionSpecial pagesRelated changesWhat links hereRecent changes