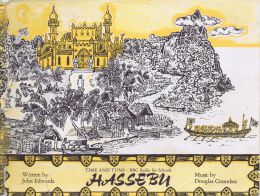 Hassebu is a unit of the BBC schools radio series Time and Tune from the 1970s, covering Music for primary school pupils.

An adaptation of a folk tale from Zanzibar. Hassebu was a very lazy boy who did not like to work. One day he and some other boys go out into the jungle and discover a honey well. The other boys take the honey to sell and leave Hassebu at the bottom of the well, where he discovers a secret passage leading to the King of Snakes' cave. Hassebu learns all the secrets of the snakes, and when he leaves the King places a mark on his back to protect him from jungle animals.

Later Hassebu is spotted by the Sultan's guards. The Sultan had eaten the honey and become ill, and only the King of Snakes can save him. Hassebu goes to find the magic spell that will cure the Sultan and save his friends.

Hassebu was Time and Tune's first experimental cantata, with a complete set of original songs and narrative telling one story. Most of the episodes consisted of the usual teaching of songs, along with activities in which listeners could create their own spells and charms - the narrative was not included. The final episode was a complete performance of Hassebu with the songs and narration in order, and some "spells and charms" written by listeners and recited by the snake. Schools could mount this version of Hassebu as their own performance.

To the best of my knowledge, no recordings of episodes from this unit have been kept by the BBC archives, but a recording of the performance was issued on LP.

The seven songs from Hassebu, with a short extract from each.

Ev'rybody listen,
See if you can tell.
Ah well, no spell!

Now that I've discovered
That I'm happy to be me.

Hassebu proved so successful that a separate pupils' book (price 20p) and teacher's book (price 35p) were put out by BBC Publications for sale to the general public.

The cantata was also included on the first Time and Tune LP, in the BBC Records Study Series, catalogue number RESR 23.

Share
Retrieved from "https://www.broadcastforschools.co.uk/mediawiki/index.php?title=Time_and_Tune/Hassebu&oldid=49628"
Categories:
Cookies help this website deliver its services. By using these services, you agree to the use of cookies.
History
Browse propertiesCite this pagePage informationPermanent linkPrintable versionSpecial pagesRelated changesWhat links hereRecent changes