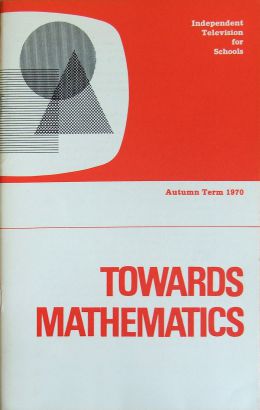 Previous series: Primary Mathematics Next series: Figure It Out

Towards Mathematics is an ITV schools TV series from the 1960s and 1970s, covering Mathematics for primary school pupils.

A maths series for junior pupils presented by Tony Bastable. The series was meant to be used over the course of one year and contained a definite progression, from number concepts including measurement and addition in the autumn term, to geometry and area in the spring term, and then multiplication and probability in the summer term. The series finishes with a quiz on all of the various topics during the year.

The series was first shown in 1968-9, and repeated in 1970-71 when decimalisation and metrification was a major topic in Britain, especially in school maths lessons. ATV was not able to re-make all of the programmes, but they did remake the episode specifically about money so that a boy who is shown with 2s 6d to spend in 1968 instead has 25p available in 1971. Episodes covering inches and other non-metric measurements were repeated unchanged in the hope that schools would not be using metric measurements exclusively. I believe they may also have revised the final quiz programme to use up to date coins, but I'm not certain.

A spring term episode called Are You Sure? is notable for employing optical illusions and camera effects to make children question what they are seeing and gain a better understanding of geometrical ideas - techniques which would be used extensively in the ATV maths programme Leapfrog almost a decade later.

Share
Retrieved from "https://www.broadcastforschools.co.uk/mediawiki/index.php?title=Towards_Mathematics&oldid=49162"
Categories:
Cookies help this website deliver its services. By using these services, you agree to the use of cookies.
History
Browse propertiesCite this pagePage informationPermanent linkPrintable versionSpecial pagesRelated changesWhat links hereRecent changes