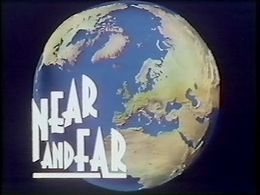 6 images from Near and Far

Near and Far is a BBC schools TV series from the 1970s and 1980s, covering geography for primary school pupils.

A wide-ranging geography series for primary school children, which covers different aspects of physical and social geography in an accessible and understandable way to help children to understand their environment.

The series presents independent units, 2 to 4 episodes long, on different topics which were designed to be taken on their own without committing to the entire year of programmes. They are particularly designed to support non-specialist geography teachers but they are also designed to present facts and approaches without covering any topic in its entirely, but supporting follow-up classroom work. 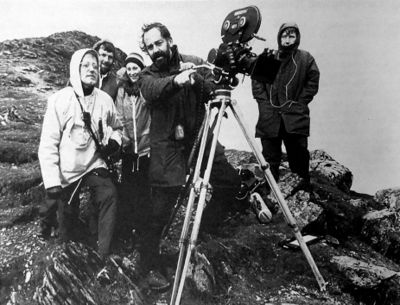 Filming a mountain expedition for Near and Far, shown in 1976

Near and Far replaced the earlier series People of Many Lands which had been running since the 1950s and which had presented a very straightforward, narrative account of different cultures around the world. People of Many Lands programmes on India, Sri Lanka, Australia and Italy were repeated as part of Near and Far in its first two years while it was establishing a full roster of new programmes.

Between 1976 and 1979 Near and Far established a solid two-year roster of programmes - although as the series was shown fortnightly to allow for follow-up time between broadcasts there were only 28 individual episodes needed to fill 2 years of broadcasts. This cycle of 28 programmes was repeated practically unchanged until 1983.

From 1983 the series begun to be updated to reflect recent trends in the teaching of geography, including additional programmes on leisure and recreation activities. Each of the two years in the broadcast cycle was rearranged so that they started at a local geographical level of a neighbourhood street and building, and moved to national and then international studies later in the year.

Near and Far: Now and Then

In 1986 a concerted effort was made to unite the BBC's history and geography offering for upper primary schools. The series The History Trail was replaced by a new history series called Now and Then.

Now and Then was specifically conceived as a companion to Near and Far. It was broadcast fortnightly in alternate weeks to Near and Far in the same slots, and covered the same topics as the geography series at broadly the same times, so that teachers could explore them from both a geographical and historical perspective.

In 1987 the two series were brought even closer together: still broadcast as separate series with different opening titles, but billed as a single programme called Near and Far: Now and Then, with the geographical Near and Far programmes mixed in amongst the historical Now and Then programmes in a more organic way, not alternating every fortnight.

Finally in 1988 the combination of geography and history programmes for this age group was completed, as both Near and Far and Now and Then were replaced by a new, combined series called Landmarks, which included repeats from both of its predecessors, rebranded with the Landmarks title, alongside new programmes.

The camera pulls out from children playing in their school playground to an aerial shot of the playground, then a satellite view of the town, a view of England, and finally the entire globe, from which the title Near and Far appears.

The theme music is a frankly eerie, Radiophonic rendition based on the nursery rhyme Girls and Boys Come Out to Play, with unsettling noises and increasing pitch and urgency as the picture moves out!

* - Exploring Your Neighbourhood was first shown as a Preview programme on Friday 13th May 1977 at 2:30pm.

** - Several episodes were revised during the run of the series, but these are not listed as separate episodes above. 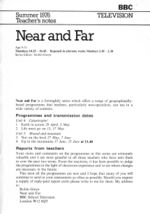 A booklet of teacher's notes was issued for each term of broadcasts.

In the first year these were the traditional small A5 sized text booklets (right).

In response to teachers' feedback the notes were expanded from the second year into much larger, A4 sized publications with pictures and pages of extensive follow-up notes on every episode (below). They were given pictorial covers including the series logo & title screen and were designed in a way which stood out from other schools publications of the same era.

From the very beginning and throughout the entire life of the series, the notes booklets included a pull-out or separate section of photographs, maps and other worksheet material for use in the classroom

Once Now and Then started in 1986 the notes for both series were combined into a single publication each term. In 1976 the notes cost 27p per term, and by 1986 the combined booklet cost £1.25 per term. 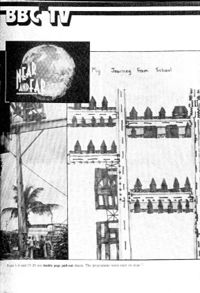 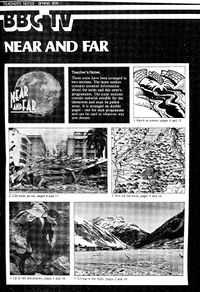 At first in 1982 a wallchart called What is a Map? was recommended, and later expanded to include charts on Mapping the Streets, Maps and Scale and Mapping the Hills.

A book called On the Map, "an illustrated exploration into the world of maps" by David Boardman was published by BBC Books in spring 1984 and recommended to accompany the series. Buy from Amazon

Share
Retrieved from "https://www.broadcastforschools.co.uk/mediawiki/index.php?title=Near_and_Far&oldid=51340"
Categories:
Cookies help this website deliver its services. By using these services, you agree to the use of cookies.
History
Browse propertiesCite this pagePage informationPermanent linkPrintable versionSpecial pagesRelated changesWhat links hereRecent changes