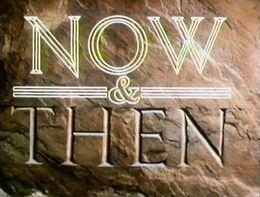 2 images from Now and Then

Now and Then is a BBC schools TV series from the 1980s, covering history for primary school pupils.

A child-friendly, topic-based primary school history series in which most episodes were made accessible by showing a class or an individual child investigating a particular element of history.

The series replaced The History Trail, and was designed very specifically as a companion to the geography series Near and Far. In addition to new topic-based programmes, Now and Then included a repeat run of four popular programmes on Life in the 17th Century including The Gunpowder Plot, Prisoner in the Tower, Plague! and Fire! which had first been shown in The History Trail in 1985, and which would live on as subsequent repeats well into the 1990s.

Near and Far: Now and Then

Now and Then was broadcast in alternate weeks to Near and Far and covered the same topics, but from a historical perspective. This site's page about Near and Far explains more about how the two series were brought closer together in their second combined year, even billed under the joint title Near and Far: Now and Then, until eventually they were both replaced by the new series Landmarks in 1988.

Now and Then and Near and Far solicited schools to send in proposals for five minute "access" films they would like to make about a topic of interest to their children. Several of these films, including a look at glass-making in Rotherham and Bronze Age carvings on Ilkley Moor, were made and shown in the Over to You episode at the end of the summer term 1987.

To an original BBC Radiophonic theme tune, an old stone mason is seen carving the word 'THEN' into a stone, while a young girl operates a computer graphics package to provide 'NOW &' in the same style.

The designer's description for the BBC Motion Graphics Archive (linked below) reveals that the graphics tool being used is an in-house BBC system called Flair.

Additionally, the two episodes on the 'Mary Rose' were repeated with in-vision subtitles as part of BBC Schools TV's "Subtitle Slot" in summer 1987, Wednesdays 17th & 24th June at 13:38 repeated the same weeks on Fridays at 10:15.

The Going to School episode from the Victorian Children unit won a BAFTA award for Best Education (Documentary) Programme[1] and was then given a special repeat for a general audience on Monday 29th May 1989 at 16:15 on BBC2.

Teacher's notes were issued for the series, combined with Near and Far.

BBC Books published Domesday Then and Now by Nicholas Whines shortly after the series started, and advertised it to accompany Now and Then and also "for general environmental studies work". It initially cost £2.95. Read more from the Centre for Computing History Buy from Amazon

Share
Retrieved from "https://www.broadcastforschools.co.uk/mediawiki/index.php?title=Now_and_Then&oldid=51341"
Categories:
Cookies help this website deliver its services. By using these services, you agree to the use of cookies.
History
Browse propertiesCite this pagePage informationPermanent linkPrintable versionSpecial pagesRelated changesWhat links hereRecent changes