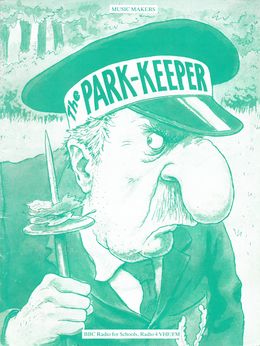 The Park Keeper (1987) is a unit of the BBC schools radio series Music Makers from the 1980s, covering music for primary and secondary school pupils.

Herbert Pringle is a city park-keeper who has got fed up with the kids cluttering up his grass with their footballs, the keep-fit classes interrupting his peace, the local busybodies harrassing him about litter picking, and the hippies protesting in his spaces.

He finds that the day a local newspaper reporter calls by to observe him is also the day the town carnival will pass through, the day the parks supervisor will visit, and the day he finally intends to resign.

The Park Keeper was first produced for Music Makers a decade earlier, in a double-bill with a story called The Mystery of McKannor Manor. Both productions were shorter than a typical Music Makers unit, covered in just five episodes and consisting of just five songs.

The unit was accompanied by a new, 24-page pupils' pamphlet giving the music and lyrics to all of the songs, with illustrations by Jon Riley.

There was also a booklet of teachers' notes. I don't know whether separate acting scripts or melodic instrument parts were produced for this unit, if you can help pleae get in touch by email.

Share
Retrieved from "https://www.broadcastforschools.co.uk/mediawiki/index.php?title=Music_Makers_(radio)/The_Park_Keeper_(1987)&oldid=50561"
Categories:
Cookies help this website deliver its services. By using these services, you agree to the use of cookies.
History
Browse propertiesCite this pagePage informationPermanent linkPrintable versionSpecial pagesRelated changesWhat links hereRecent changes