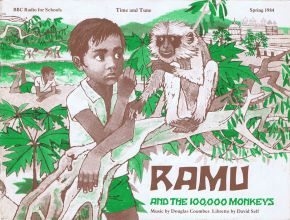 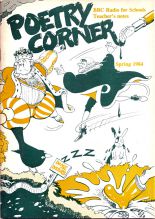 Explorations II: Secondary English was broadcast at 10:20-10:40am on Thursdays. I don't know the details of any other transmissions this term. Today and Yesterday in Northern Ireland must have been shown at some point.

I don't know very many details of the programmes shown this term, but I do know when they were broadcast:

The following list of variations may not be complete...

Programmes for secondary schools broadcast at 12:30-1:10am each weeknight (so on the night of Monday to Tuesday, up to the night of Friday to Saturday) on Radio 4, Radio Ulster, Radio Scotland and Radio Cymru. According to newspaper listings Radio Cymru had a extra hour of schools night-time broadcasting on Thursdays at 11:30pm-12:30am, presumably for Welsh-language programmes. This slot was specially designed for recording, it was 40 minutes long as this was felt to be the longest time that could "safely" be recorded on one side of a C90 (90 minute) audio cassette.

BBC Radio Scotland broadcast two different series - Talking Points and It's Hard Work in week 6, instead of the programmes from England.

Programmes ran from Monday 16th January to Friday 30th March 1984. Most series were repeated for half-term in the week beginning 20th February, including night-time broadcasting which had Deutsch für die Oberstufe in those weeks. However there was a new episode of Wavelength that week, the teenage magazine programme presented by Andy Peebles, and of the topical series In the News.

There were two brand new radio series this term: Choices, about choice of courses in secondary schools and colleges, and English for Examinations: Communication - both part of the night-time broadcasting schedule.

Educational programmes in England billed as "Daytime on Two".

Around Scotland on Thursdays and Fridays, and Scotland This Century on Mondays were intended to be transmitted only in Scotland, but "for technical reasons" they were available "on some network transmitters" and they are included in the grid above[1].

Programmes ran from Monday 16th January to Friday 30th March 1984. Programmes from the previous week were repeated for half term in the week beginning 20th February 1984, including all the continuing / adult education programmes at lunchtimes, but as usual not including the young children's series You and Me.

On Monday 2nd and Tuesday 3rd April many schools programmes were repeated "for viewers who were unable to receive them when the Mendip transmitter was closed between 6-9 March"[2].

Exploring Science and Look, Look and Look Again were both fortnightly series, but in their timeslots on Fridays at 10:38am and Tuesdays at 2:40pm respectively they did not alternate with any other programmes. So every other week, when the programmes were not on, the BBC broadcast Pages from Ceefax in those timeslots instead.

The schedule for Central Television in the Midlands was identical to the Thames schedule shown above. In fact most of the schedule was common to all regions, only Thames's The English Programme, Middle English & Seeing and Doing, and Granada's History in Action, were replaced entirely in some areas (repeats of other programmes may also have been replaced, but they were all shown at least once throughout the country).

The following are the programmes which replaced them, but I don't know on which days & times these programmes were shown...

If you have any more details about these programmes please get in touch by email or on the forum.

Hop, Skip and Jump - the Ulster Television topics series for 6- and 7-year olds which began in 1978 - was unrelated to the BBC schools radio series of the same name - a movement series for 5- to 7-year-olds produced in Scotland - which began in 1994.

All Welsh-language programmes produced by the BBC and ITV were screened on the Welsh fourth channel.

Young children's programmes were shown at 2:20pm between the schools programmes, including Nodi (Noddy), Stori Sbri and the long-running Ffalabalam.