Fishing for Fivers is a unit of the BBC schools TV series Merry-Go-Round from the 1960s, covering Reading for primary school pupils.

This "experimental unit" of programmes told a simple children's adventure story, filmed as a drama serial, about a boy and girl who track down a thief. In between the filmed segments, viewers were encouraged to practise reading along with the story, with the aim that reluctant readers would be given the motivation and confidence needed to read stories themselves. This was the first of two experimental Merry Go Round units that lead to the long-running series Look and Read.

"Teachers of children who find reading difficult are well aware that when the children's labour so far has brought them little reward, some experience of success is essential. Some new, stimulating, exciting adventure, engaging the child's whole attention and planned to lead him to some achievement is necessary."[1]

This unit of programmes was an experiment in providing a stimulus for children who had left the infants and begun junior school, but were still not as good at reading as their peers - children described at the time as "backward readers." It was hoped that these children could be brought aside from their normal classes and allowed to enjoy the television series as a group, without the discouraging presence of children who are already good readers chipping in all the answers first. The programmes were made for children with a reading age of 6 to 7 1/2, and a likely chronological age of perhaps 7 to 11.

The scheme was the work of producer Claire Chovil, a former teacher and also producer of children's radio programmes such as Children's Hour. Upon starting work in BBC schools television Chovil undertook a temporary teaching role in a junior school in order to investigate teachers' requirements, and observed the importance of reading progress in this age group. She was advised throughout by Dr Joyce M. Morris, another former teacher, who had co-founded the United Kingdom Reading Association in 1963. Although schools TV had already begun supporting "less able children" in general in the early years of secondary school with the series Television Club, it had never yet dealt directly with the acquisition of reading skills.[2]

Before any programmes were transmitted, a single "dummy" pilot programme was shown in a few schools to assess how useful it could be[3], but it really was still at an experimental stage when it reached screens in schools nationwide in spring 1965.

The programmes were only shown once (or rather twice, as each episode was shown on a Tuesday and a Thursday in the same week) in Spring 1965 as detailed below. As they were experimental and some flaws were found in their presentation, it would have been inappropriate to repeat them in later years. Nevertheless the legacy of these programmes is immense as, after a further experimental run with the story Tom, Pat and Friday the following year, they continued as a series in their own right, the immensely popular and long-running Look and Read. 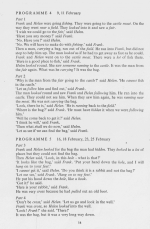 The first page of the story as given in the teacher's notes.

Frank and Helen are on their way to go fishing in a castle moat. They see a fair set up in a field, but they don't have any money and so continue fishing. A man comes running out of the field carrying a bag and knocks Frank down but doesn't stop. Later they see the man come running into the castle and try to follow him, but when they catch up he is running back to the field without the bag.

The children look round the castle trying to find the bag, first they pull an old boot out of a hole but then they spot the bag down a deep well. They manage to recover the bag with their fishing rods but they can't open it. Frank thinks the man stole the bag and it has money inside, so they take it to the police station, watching out for the man all the time.

The policeman recognises the bag and is stern with the children, just saying "we shall see" over and over again, and they think he suspects them of stealing it. The policeman gets a phone call and takes the children to the fair in a police car. He reveals that the bag contains the wages for the fairground workers and by now everybody is very pleased with the children. As a reward, they get to use the whole fair for free.[4]

Within each episode, the filmed story was split into two parts, with a teaching section in-between based on the story that had already been shown - exactly the format that Look and Read would use for decades to come. The teaching section was presented by Tom Gibbs, already familiar to children from other Merry Go Round programmes.

There were animations to show grammatical points in an effort to make the words interesting, such as two moving eyes in the middle of "look", flashing or jumping letters to show the difference between "lock" and "look" or "were" and "where", and the Magic E rolling on to the end of "her" and sparkling to make it "here" and the changed vowel then growing in size as it "says its name and not its sound." These sort of devices, seen as simple mnemonics by the programme makers, were viewed as "gimmicks" by many watching teachers and criticised for being too complicated.

In one of the most deliberate efforts to engage children with the programmes, teachers were asked to assign every child with a numbered card from 1 to 8 before each episode started. Whenever the presenter asked a question one of the numbers would be displayed on screen, the children with that number then had to think of the answer and shout it out when a tone was sounded and a picture came on the screen after a few seconds thinking time. This helped make sure that all children took part and not just the most confident ones, although some watching teachers were disappointed that the cards were not used more often after they had gone to the trouble of making them.

At the end of the teaching section several sentences from the story of that episode were shown on screen for children to practise reading out loud, with a line shown above each phrase in turn, like this, highlighting which bit to read. Sometimes they even showed the page turning to emphasise that children were reading a book from the screen.[5]

The Key Words to Literacy

The text of the story, both in the script and on the page, was very carefully controlled. Rather than drawing on any of the existing early reading schemes at the time, because there were simply too many of them to create a nationwide compromise, the programmes' vocabulary was based on a recently published text called "Key Words to Literacy" by J. McNally and W. Murray, which was the result of a study into the frequency of word usage in the English language.

This provided a basic list of 200 essential words needed for basic communication, from "the" and "and" to "door" and "water", which children could be expected to use in everyday speech even if they could not yet read them. The text of Fishing for Fivers was made up of 137 of these words plus a limited number of more irregular "interest words" needed to tell the story, such as "Frank", "Helen", "fishing" and "policeman."

Six pages in the teacher's notes for Merry Go Round in Spring 1965 were given over to these experimental programmes, including vocabulary lists and the full text of the story.

Although it was very important for children to be able to read the story after they had seen it on TV, there was no separate story book published ("it has not been possible to provide pupil's pamphlets"[6]). Teachers were able to copy out the story from the notes and distribute these to children if they wished. Unfortunately, the typical typewriter font is much smaller and harder to read than a typeset book, especially for those who find reading difficult to begin with.

A film telerecording of episode 2 was made available by the School Broadcasting Council in 1965 for use in teacher training[7].

At the start of the first episode Tom Gibbs told the viewers, "during the next few weeks you and I are going to make a book together," and children were encouraged to send it their own drawings of the story with sentences underneath - some of these were shown on screen in subsequent weeks. The BBC received over 90 letters or parcels of work during the broadcasts, and several reported creative follow-up activities such as plays, models and puppets.

The aim of engaging with children seems to have been met, a teacher from Rickmansworth reviewing the unit noted that their class of eight to ten year olds "found (the programmes) quite credible and interesting."

The main response from viewing schools was reported to be overwhelming demand for more of the same, and soon: "it did more than any other medium to stimulate backward readers."[5]

According to BBC archive catalogue, episodes 2, 3 and 4 of this story still exist in the BBC archives. Episode 1 is not listed at all.

Share
Retrieved from "https://www.broadcastforschools.co.uk/mediawiki/index.php?title=Merry-Go-Round/Fishing_for_Fivers&oldid=47297"
Categories:
Cookies help this website deliver its services. By using these services, you agree to the use of cookies.
History
Browse propertiesCite this pagePage informationPermanent linkPrintable versionSpecial pagesRelated changesWhat links hereRecent changes