Previous series: Figure It Out Next series: Basic Maths

Leapfrog is an ITV schools TV series from the 1970s and 1980s, covering Mathematics for primary school pupils.

A maths series in which presenters in the studio carry out investigations and tell stories, interspersed with animations, real-world films and location footage, providing a bank of eye-catching experiences to help children understand concepts of number, shape and measure. So far so ordinary, like the ITV schools maths series which preceeded it (Figure It Out) and followed it (Basic Maths, Junior Maths and Video Maths). But Leapfrog was a very unusual series, and proved simply too unorthodox for many of the teachers who tried to use it.

The presenters were Fred Harris (who also presented all of the ITV maths programmes mentioned above, plus many others), Sheelagh Gilbey and Anni Domingo, while Sylveste McCoy (sic) appeared in films shot on location, often playing a character called Bert who was trying to overcome large-scale mathematical problems. The presenters often did not speak to each other or the viewers, and long sections of the programmes would pass with only music or ambient sound being heard.

Leapfrog was structured as a magazine programme, with typically six or seven distinct items covered in each 15-minute episode. The episodes, unusually for a maths schools programme, were not themed around a particular topic (except in the summer term), themes simply flowed and developed throughout the series. Some of the items were revisited throughout the series and built up into sequences so that they did not make much sense when seen once, but became clear over the course of the school year.

In the autumn term there were repeated sequences showing Bert out of doors with two piles of regularly sized logs, trying to lay them down in two rows of exactly the same length, as well as regular items showing the complements of a number being worked out with fingers and thumbs - obviously this was most straightforward when showing the complements-in-10 such as 3 and 7, but some fingers could be painted blue and tied up with ribbon to show that they "don't count", so that the complements in lower numbers could also be shown. There were also regular animations showing a shape and its mirror image intersecting each other, with the intersections creating lots of different shapes.

There were more intersection animations in the spring term, but whereas they were achieved by straight translation in the autumn term, in the spring the shapes rotated around each other, creating different intersections. The spring term also showed the presenters counting using a 'tens table', with 100, 200 etc on the top row and "hundred" written at the end, "and" at the start of the middle row followed by 10, 20 etc and "-ty" at the end, and 1, 2 etc on the bottom row. By tapping a different place in each row, three-digit numbers could be identified. There was also a number line which could be used to move forward and backward using strips of card cut into exact sizes such as 3 units or 5 units.

Bert, having succeeded in his logging task at the end of the autumn term, spent the spring term trying to create patterns of carpet tiles, of which he had different amounts in three separate colours. At first he attempts to fit them all together in a tessellation, then later tries different regular patterns. The spring term also featured serialised extracts from Norman Juster's The Phantom Tollbooth, about a boy called Milo's adventures in a strange world full of fantastic mathematics.

Another of Norman Juster's works, The Dot and the Line, was serialised in the summer term. The summer also featured simple algebraic statements, with numbers replaced by a box or a triangle. This work was begun in the final episode of the spring term, and the algebra did not have to be solved, just to have suitable numbers found by trial and error. Pegboards were used occasionally in the spring term, and geoboards (like pegboards, but with all the pegs already in place so that rubber bands can be stretched between them) were used in the summer term to explore shapes. In the summer term there was a definite theme to each episode, with features on each of the numbers 5, 4, 3, 2, 1 and 0 (although these occupied only a portion of each episode) and special programmes devoted entirely to themes of growth and circles.

The programmes were extremely visual in nature and took advantage of many television tricks, especially overlaying the presenters on top of other images. When the complements identified by fingers and thumbs were displayed as numerals it was not by typing the numbers on the screen, but by having two of the presenters overlayed on top of the film, running onto the screen carrying large, colourful numbers and holding them up. 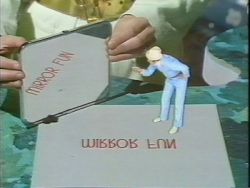 The name 'Leapfrogs' was already being used by the group of well-respected maths teachers who wrote the programmes and advised on the content - Ray Hemmings, Derick Last, Leo Rogers, David Sturgess and Dick Tahta. They published books, cassettes and other aids for maths teachers.

In the case of both the teachers' group and the television programme the name was chosen firstly as a neutral describing word or catchphrase. More importantly, the rules of the children's playground game of leapfrog were seen as representative of the series' approach to maths: a game played simply for the enjoyment of the children taking part, all sharing the experience with no winners or losers[1].

Leapfrog was innovatory in the development of mathematics on schools television, but it was not judged to be a great success at the time.

Stylistically the programmes were aimed at pupils who had grown up with television and enjoyed the colourful, unusual images they were shown. Teachers, on the other hand, often didn't know what to do with it. The long silent, or at least speech-free, portions of each programme were designed to be filled in by the teacher talking with the class about what was happening, but when teachers were not expecting this, or couldn't fill up all of the time, or simply found it hard to reconcile the unrelated sequences in each episode, the classroom experience of watching the episodes could turn into uncomfortable silence.

An evaluation report on the series identified "undoubted polarisation in the primary school between those who feel (Leapfrog) to be an excellent series and those who feel it has no redeeming qualities."[2] The generally negative response from teachers lead to a steady loss of viewers[3].

The final episode of the series was shown to a group of 11-year-old children as part of an IBA Research Fellowship, alongside episodes of its contemporaries Maths-in-a-Box, It's Maths and others. The children were asked to judge how they felt the series would work for its intended audience of eight- and nine-year-olds. Many thought that it would be "too easy" due to its choice of topics and repetition of those topics, whilst at the same time "too confusing" in its presentation.

They were enthusiastic about the visual style...

"It has nice colours. The way the camera made the people small is nice."

...but not about the lack of explanation in the presentation style:

"They should explain what they are doing. I think it is a bit boring because it is so easy."

"You feel as though they don't want to talk about it to you."[4]

After three years on the air Leapfrog was replaced by a new series called Basic Maths. This shared many of the production team of Leapfrog as well as the presenter Fred Harris, and it reproduced many of the items from its predecessor, even using some of the same film sequences. However Basic Maths was much more orthodox in style, with proper presenters actually talking to the viewer and episodes based on a common theme, and it proved to be more successful[3].

The following guide to all 28 episodes is based mainly on the descriptions given in the teacher's notes.

The series was broadcast over three academic years, always networked at the same time across all of the regional ITV companies, and always with its first transmission on Tuesdays at 11:05am (basically the same timeslot which its predecessor Figure It Out had occupied since 1972). Repeats were shown firstly at 9:30am on Fridays (also the same timeslot as Figure It Out) and in subsequent years later on Friday mornings.

In autumn 1979 the first five episodes of the series were not screened due to the long ITV strike that year, but the series picked up with episode six and proceeded through the rest of the year's episodes as scheduled. 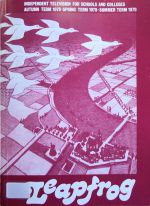 Leapfrog was accompanied by an extremely thick - 118 pages long - and comprehensive booklet of teacher's notes covering the entire year's programmes, written by the same Leapfrogs teachers group who wrote the episodes themselves.

Each episode was given a detailed outline synopsis listing each item and the mathematical point that it covered (though not always in exactly the same order that the items were broadcast), cross-referenced with several pages of detailed suggestions for follow-up work. There were black and white diagrams throughout.

The booklet also featured an essay on 'Television, Mathematics and Leapfrog' which explained the reasoning behind the introduction of the series and its position in the development of maths on schools television ("up to three years ago, the output of both the BBC and ITV in (the area of mathematics) was predominantly direct teaching or programmes that looked very like it."). Each term's episode listings were preceded by a section deatailing the on-going sequences through that year's programme.

Share
Retrieved from "https://www.broadcastforschools.co.uk/mediawiki/index.php?title=Leapfrog&oldid=47827"
Categories:
Cookies help this website deliver its services. By using these services, you agree to the use of cookies.
History
Browse propertiesCite this pagePage informationPermanent linkPrintable versionSpecial pagesRelated changesWhat links hereRecent changes