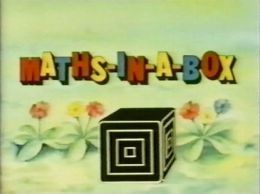 Maths-in-a-Box is a BBC schools TV series from the 1980s, covering Mathematics for primary school pupils.

A delightful maths series for infant school children about a girl called Tracy and her friend Paul from next door, who meet a strange man from another world and have to teach him all about basic number techniques, geometry and measurement.

The visitor, whose name is Powka, comes from a place called Sooter and travels around in a magic box which is the same shape and size as the dice used in board games. By reciting the magic words - tiki tiki tox, out of the box - he is able to leave the box and grow to the size of a normal man. The children are also able to shrink down and accompany him back into the box by reciting tiki tiki tox, in to the box. 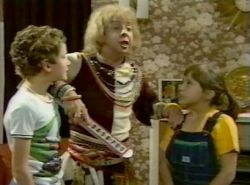 Tiki tiki tox - in to the box!

Inside Powka's magic box is his talking computer, which has been damaged in a flood - all the things it used to know about numbers and shapes have been washed away - and so Powka knows nothing about maths. Together the three of them go to visit different places (generally filmed outdoors) in the magic box to gather the knowledge needed to repair the computer. The computer can talk and display diagrams and animations, and at the end of each episode it delivers a catchy song about the maths it has learned. The computer's voice was provided by Northumbrian singer-songwriter Alex Glasgow[1], who presented the BBC schools maths series Countdown throughout the 1970s, and also wrote all of Maths-in-a-Box.

Powka's magic is carried out with the help of his special magic wand, called a "trustock". The trustock looks like a small, thin cricket bat with numbers all along it which help with counting and addition. Initially it has the numbers from one to nine, but when the children tell Powka about zero and then numbers up to 19 he adds them to the stick as well. Powka uses the trustock to register information from his experiences and then feeds the information into the computer when he returns to the box.

The series cast the children as teachers and Powka, the adult figure, as the pupil. The mathematical concepts are all based on real-life examples and there are fun subplots involving Powka being visible only to children not adults (in particular, not Tracy's mum who teases them about their apparently imaginary friend, "the man in the box"), and Tracy and Paul finding out about how things are different in Sooter through a series of riddles. A study of the series noted that "the price of its undoubted popularity with children is (the amount of) time devoted to strictly non-mathematical material included to keep the story-line credible."[2]

Careful use was made of simple mathematical terms and concepts, such as sets "including" other sets and things placed "above" or "below" other things or being "bigger" or "smaller" than each other, and pointing out where Powka uses these words ambiguously. A sum of 3+4 was read as "three and four". The episodes dealing with heaviness used the term "weight" rather than "mass".

One survey found that "a curious phenomenon seemed to surround Maths-in-a-Box."[3] While the series was quite widely used by teachers to support mathematics teaching, it was used by even more teachers to support language, and by almost as many again as a general interest series for infants. So the time sacrificed to keep the storyline viable was obviously worthwhile given the wider use made of the series than simple maths support. 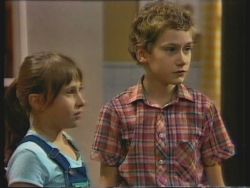 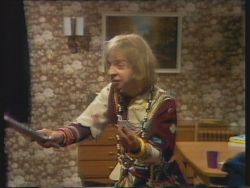 The animated opening titles show the magic box landing in a field and all sorts of numbers and mathematical symbols emerging. The letters to form "Maths-in-a-Box" also emerge.

Here are a few alternative spellings of the rhyme, to aid web searches (the spelling used on this page is as given in the music in the teacher's notes): ticky ticky tocks, tikki tikki tox, ticki ticki tocks, tiky tiky toks -- into the box!

It was repeated in the following academic year, but instead of showing each episode twice a week they ran through the whole series twice in separate terms - it was shown in the autumn term of 1980 and then immediately the whole thing was shown again in the spring term of 1981, both times in the Friday timeslot only.

Feedback from teachers evidently reported that they needed more time to build on the mathematical content of each episode[4] and so from the 1981-82 school year the programmes were shown fortnightly, spread out over the autumn and spring terms. Episodes were shown on alternate Thursdays at 11:05am, with episodes of the geography series Near and Far] shown at that time in other weeks. 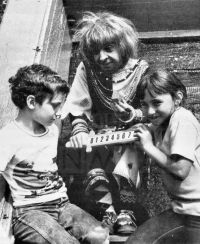 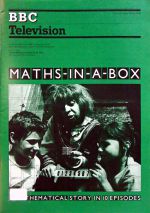 Maths-in-a-Box was accompanied by a detailed 24-page A4 booklet of teacher's notes printed in green and black, covering the storyline and maths content of each episode. It gave both the lyrics and sheet music for all of the computer's songs and the series theme tune, and included photographs and diagrams. It also contained extensive background information for teachers about the mathematical themes covered, suggested activities for teachers to conduct in the classroom, and problems for children to solve after each episode.

The notes were edited by Leslie Foster, with drawings by John Gilkes and cartoons by Paul Cemmick.

Share
Retrieved from "https://www.broadcastforschools.co.uk/mediawiki/index.php?title=Maths-in-a-Box&oldid=48055"
Categories:
Cookies help this website deliver its services. By using these services, you agree to the use of cookies.
History
Browse propertiesCite this pagePage informationPermanent linkPrintable versionSpecial pagesRelated changesWhat links hereRecent changes