Music Time: Peter and the Wolf 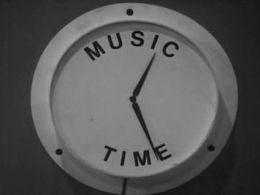 Peter and the Wolf is a unit of the BBC schools TV series Music Time from the 1970s, covering Music for primary school pupils.

The first term in the original one-year Music Time course begins simply, with children asked to join in with one-note refrains in songs performed by the presenters. Mari Griffith and Ian Humphris both play the guitar and, joined by a few dozen 8 year-olds in the studio, sing all the songs.

They introduce some basic circle singing games that children can reproduce in the classroom, starting with I'm on the King's land and Wallflower, Wallflower, and demonstrate how to make some improvised musical instruments such as maracas made from dried peas in a bleach bottle and a lagerphone made from old metal bottle tops stuck to a broom handle.

The musical story of Peter and the Wolf is the common theme for listening music throughout the term.

Peter and the Wolf

“We make no apologies for this. It comes fresh to every generation of children, and we illustrate the story with some specially designed puppets.” 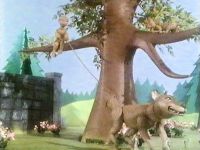 Peter and the Wolf animated by Bura and Hardwick

The first 8 episodes of this unit include a specific excerpt from Peter and the Wolf by Serge Prokofiev, in which a young boy encounters the animals in the forest near his home including a fearsome wolf. Each animal is introduced in turn alongside the instrument which represents it. The entire story is shown in the 9th episode.

The story is accompanied by a 15-minute stop-frame animation made by Bura and Hardwick, the team also responsible for Music Time's renditions of Coppélia, The Sleeping Beauty and The Nutcracker, as well as Crow and Alice from You and Me and many stories from Words and Pictures.

From American Folk Songs for Children by Ruth Seeger, Doubleday.

This song was only featured in the first episode, with children asked to join in with "yes ma'am" at the end of each line, and it was not printed in the pupils' pamphlet.

From Songs for the Elementary Classroom by Paul Brodsky, Follett Educational Corporation.

SongA Round of Bells

Christmas bells sounding so loud and so clear,
Ringing their message for all men to hear.

A cuckoo flew down from a Christmas tree, "Cuckoo!"
Then perch'd on the manger and thus he sang, "Cuckoo!"

This song was performed as a surprise item in the end-of-term concert and it was not printed in the pupils' pamphlet. Children were only asked to join in with Amen, Amen.

The episodes do not have titles, but most introduce a character from Peter and the Wolf and the instrument which played that character's tune. Several episodes also include a suggestion for a musical instrument which children could make themselves.

Programme 9 includes a few minutes of studio work followed by a full 15 minute presentation of the Peter and the Wolf animated film by Bura and Hardwick.

Programme 10 is an end-of-term concert in which all of the songs from the term are sung again. The folk band The Spinners join the presenters in the studio to sing the Music Time songs, plus Fried Bred and Brandy-o, De Virgin Had a Baby Boy and the singing game De Play Begin.

Watch on YouTube. A lengthy clip from the end-of-term concert in Programme 10 of this unit, featuring The Spinners in the studio singing many of the term's songs. I don't think the BBC have a full recording of this episode. 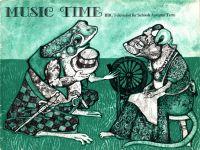 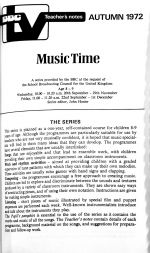 A 24-page pamphlet containing most of the songs from the term's programmes, plus words for the singing games and illustrations supporting the pitch and rhythm work from the TV programmes.

The centre spread shows all of the puppet characters from Peter and the Wolf and the musicians who play their tunes.

A 24-page black & white booklet of notes for the teacher, including a double-page about the content & suggested follow-up work for each episode.

The notes were rewritten to accompany the repeats from autumn 1972. 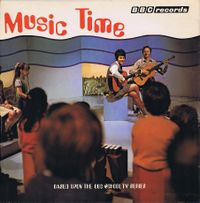 A mono LP containing selected songs from the first two years of Music Time was released by BBC Records in 1972. The songs were arranged by John Hosier and sung by Mari Griffith and Ian Humphris with children from Hermitage Junior School.

From this term, the record includes Frog Went A-Courting, What Shall I Do?, Sweet Potatoes and Russian Carol.

Share
Retrieved from "https://www.broadcastforschools.co.uk/mediawiki/index.php?title=Music_Time/Peter_and_the_Wolf&oldid=49646"
Categories:
Cookies help this website deliver its services. By using these services, you agree to the use of cookies.
History
Browse propertiesCite this pagePage informationPermanent linkPrintable versionSpecial pagesRelated changesWhat links hereRecent changes