currentsequence: Summing It Up--Primary Mathematics--Towards Mathematics--Figure It Out--Leapfrog--Basic Maths--Junior Maths--Videomaths; ### size: 8### Figure It Out: 3
ATV's series for junior school maths classes throughout most of the 1970s is actually two completely separate series under the same title.

Banner for a classroom Figure It Out noticeboard, provided by ATV

The original series of 26 episodes from 1972, presented by Tony Bastable (who had also presented its predecessor, Towards Mathematics), look at practical activities, like children sorting themselves when the bell rings in a junior school, counting parked cars, and using addition and subtraction when shopping. Viewers are directly given questions and tasks to investigate, and teachers are encouraged to maintain a Figure It Out noticeboard on the classroom wall, with suggestions given in each episode for items to be added to the noticeboard that week. These programmes were designed so that they could be used with pupils over two years, with the simpler odd-numbered episodes screened in the first year, and the more advanced even-numbered episodes in the second yearSeveral of the episodes were remade for repeats in 1973-4 and 1974-5, but I don't know exactly which ones. 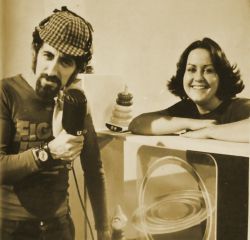 A second, completely different series of Figure It Out was introduced in 1975, presented by Fred Harris and Jane Alford. These 28 programmes had a more loose, magazine style with lots of different items in each episode, not linked to the same mathematical topic, and an emphasis on being fun to watch for the child viewers. The teacher's notes warned that "the programmes contain jokes which teachers may find excruciating but which most children will enjoy." This series includes regular characters such as KEN, a broken-down computer who knows all about maths, the Mathematical Mandarin who knows all about karate, superhero Supermath, a Noel the Numbers, a "smelly onion seller from Marseilles". There were also mimes performed by Ben Benison.

After the second version of Figure It Out had run its own three-year course it was replaced with a revolutionary new maths series for juniors, also presented by Fred Harris, called Leapfrog.

Some of the episodes from series 1 were remade in 1973-4, but I'm not sure which so they are not listed here.