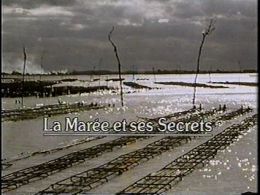 A contemporary thriller serial set amongst the treacherous oyster-beds of northern France, in which holidaying teenagers uncover criminal activity and deadly secrets. The serial is completely in French and features only French characters, to give viewers both the clear and authentic sound of spoken French and a taste of an interesting part of French culture.

It had been almost 20 years since the BBC last made a French-language serial for schools, 1968's La Chasse au Trésor. The motivation to return to a drama serial in the 1980s came from the tremendous success of Look and Read with schoolchildren and their teachers in supporting English and reading at primary level using exciting drama serials supported by reading books and worksheets. Look and Read's producers, writer and wider production team created a serial for early secondary pupils with similar support publications, entirely in French.

Two decades on, the villian in La Marée was portrayed by the same actor, André Maranne, who had portrayed the villain in La Chasse au Trésor.

Two Parisian teenagers, Yves and Marie-Pierre, spend a holiday in the fishing town of Cancale in north-east France, staying with a couple of Yves' cousins and his grand-father Lucien Keravec.

Lucien takes them by boat to the isolated oyster-beds on which he makes his living, alongside Yves' cousin Alain. Lucien is keen to point out the dangers of the muddy surface and the fast-moving tide. They also meet Robert Lecoz, owner of the local supermarket and a former friend and oyster farming colleague of Lucien.

Yves and Marie-Pierre take a tour of the supermarket and there encounter an unpleasant young woman named Catherine, whom they had earlier spotted meeting secretly with Alain. Meanwhile Lecoz is preoccupied with specially-chauffeured deliveries of cauliflowers, a local speciality.

It turns out that Alain is covertly helping Lecoz, hoping to be employed by him.

Lucien goes to see Lecoz in his isolated house and discovers that Lecoz knows about a secret Lucien had kept for twenty years: one foggy night, Lucien and another man, Jacques Le Guen, were alone on the oyster-beds with the tide coming in and a boat only big enough to carry one of them. Lucien assaulted Jacques and fled in the boat, leaving the other man to be killed by the tide. Lecoz's new associate Catherine is revealed to be Le Guen's daughter, seeking revenge on Lucien for the death of her father. The pair of them blackmail Lucien with this information into hiding their consignment of cauliflowers on his oyster-beds - cauliflowers being their euphemism for the diamonds Lecoz is smuggling.

Yves and Marie-Pierre go for a walk near Lecoz's house themselves. In the mist Yves loses his footing and almost falls off the cliff, but is saved by Lucien. The teenagers later spot Alain in town with Lecoz's truck driver, and follow them back to the Lecoz supermarket. They are spotted inside the supermarket and get chased all the way through Cancale by Lecoz and his men. When the villains finally catch up with them, Lecoz leaves the others and sets off across the beach for a deadly confrontation with Lucien Keravec.

Map of Cancale from the pupils' pamphlet

La Marée et ses Secrets (the title literally translates as The Tide and Its Secrets) was written, in English, by Christopher Russell - a Look and Read regular who had already scripted the serial Fair Ground! and would go on to provide Geordie Racer and other stories later in the 1980s. The script was then translated into French by Jane Cottave, a researcher working on other French-language programmes for the BBC Schools department.

The series was filmed on location around the town of Cancale

in Brittany on the north French coast, where it was set.

The assistant producer for the story, Susan Paton, was an accomplished linguist who would go on to produce many notable foreign-language programmes for BBC Schools, including the magazine Quinze Minutes and the drama serial Le Café des Rêves. However the producer and director of the story, Look and Read maestro Sue Weeks, spoke barely a word of French. This was a significant problem since the story was shot entirely on location in France, with a cast of French natives and a technical crew to match. Ms Weeks undertook intensive training in the language, but the filming still required negotiated communication in both French and English!

The villain of the piece, Robert Lecoz, is the director of a new local supermarket near Cancale. Footage of the supermarket seen in the serial uses a store from the popular French chain E.Leclerc - though you never see the company name on screen, there is a huge painting of the distinctive circular 'L' logo on the wall. The production team sought permission to feature the E.Leclerc shops from the two brothers who ran the chain in real life - and they had no hesitation in agreeing wholeheartedly to their supermarkets being featured in the drama, even though they would be associated with the baddie. Nowadays, E.Leclerc is a major French corporation whose directors are unlikely to be contactable for such trivialities, nor agree to be seen as employers of baddies.

The shocking conclusion of the story involves violent death to major characters. Such brutality would never normally be tolerated in a programme intended to be screened in schools - see, for instance, the carefully justified gun imagery in the Look and Read story Cloud Burst. The exception was made in this case, apparently, because the baddie is SUCH a horrible, despicable person, that no other fate would properly befit him. There were no significant complaints about the content from teachers who used the series. 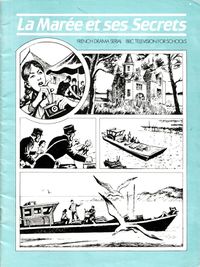 The pupils' pamphlet came in the form not of a reading book but a comic book, illustrated throughout in black & white by Patrick Williams and with exclusively French text. 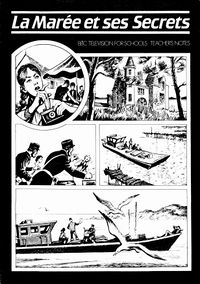 The 16-page, A4 teachers' notes contain a synopsis and transcript of each episode, guide to the keywords and possible vocabulary difficulties that pupils will encounter, and a vivid introduction to Cancale and its oyster industry including an explanation of why the particular tidal mud is known as la vase rather than la boue which is "ordinary, everyday mud". 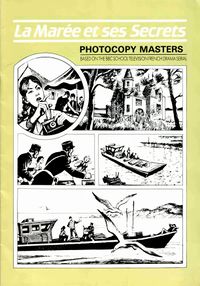 Illustrated pupils' worksheets, including a board game and a crossword, were distributed first as spirit duplicating masters and later as photocopy masters.

Share
Retrieved from "https://www.broadcastforschools.co.uk/mediawiki/index.php?title=La_Maree_et_ses_Secrets&oldid=50023"
Categories:
Cookies help this website deliver its services. By using these services, you agree to the use of cookies.
History
Browse propertiesCite this pagePage informationPermanent linkPrintable versionSpecial pagesRelated changesWhat links hereRecent changes