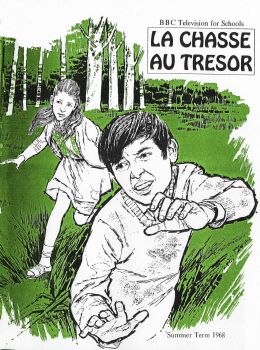 La Chasse au Trésor (The Treasure Hunt) was a thrilling drama serial for children in the higher years of primary school. It was about two 10-year-olds in a French town who follow the trail of a dangerous criminal, hunting for a lost treasure in the local woods with the ripped half of an old treasure map.

The villain was a memorable figure, with a black leather trenchcoat, large sunglasses, stubble and a scar down his cheek, and towards the end of the story he kidnaps the girl - however it was noted that the "sunshine and friendliness" of the town in the story "compensate for the genuinely scary impact of the villain"[1].

It was presented entirely in French (including, as the teacher's notes pointed out, the end credits[2]) and featured an entirely French cast, but it was intended that children of about 10 years old should be able to follow the action without help, so long as they had made reasonable progress over two years of studying the language. The vocabulary used was therefore basic - on several occasions characters count things out in French from un to dix, and there were many opportunities for close-up shots of words like "bureau" and "château" in the environment.

The serial was set against the backdrop of a typical French town, and the type of everyday French culture that primary school pupils would be taught was frequently included. There were long sections about the children's routines at breakfast and dinner time, and the kind of things to be found in the market (cheeses and sabots). A little background about the French Revolution was also necessary to understand the origins of the treasure. The characters had a tendancy to talk to themselves about what they were doing so that viewers would experience everything in French - the villain Lucciani especially is constantly muttering to himself about the instructions on the treasure map.

The incidental music in each episode was based on traditional French tunes, and the two children had their own songs, based on French nursery rhymes. "La chanson de Patrick" was based on La bonne aventure o gué with some of the lyrics changed, and "La chanson de Dominique" was Scions du bois. The serial was written by Michel Faure, known in education circles at the time from the BBC's adult education French series Bonjour Françoise of a few years earlier.

One of the main aims of the series was to enthuse children with a thrilling adventure story and give them, as the producer Ronald Smedley pointed out, "the pleasure of finding out that they can understand a foreign language"[3].

One of the first uses made of schools television was to give an authentic taste of French language & culture filmed in France - by the ITV companies at least.

Initially these programmes were aimed at sixth forms (Ici La France) and experienced pupils in secondary schools (French from France), but the company Associated-Rediffusion in particular began making drama programmes in French for pupils with 2 or 3 years experience of the language (Chez les Dupré, Le Voyage du Jéricho etc). Indeed in the spring term of 1968, just before La Chasse au Trésor went out on the BBC, Associated-Rediffusion presented a new drama serial in French about a hunt for a lost treasure in a typical French town, for 2nd or 3rd year pupils of the language including those in primary schools. This was Le Mystère de Valbec, which has its own page on this site.

The BBC's schools television service on the other hand did not immediately offer programmes on modern languages, although BBC schools radio broadcast a variety of French programmes since its very beginnings[4]. In fact the proficiency of schools radio in covering modern languages was apparently the reason that BBC television did not initially make any efforts in that direction: Kenneth Fawdry, BBC Head of School Television, wrote in 1967 that in respect of languages "(television's) advantages, in school conditions, over radiovision or recorded radio programmes plus pamphlets are questionable."[5]

The BBC did screen a thriller serial in simple French language from January 1966, this was Suivez la Piste but it was a series for adult education shown on both BBC1 and BBC2, not a schools series. However a teacher's guide was issued to accompany Suivez la Piste[6] so it could plausibly be used in schools.

It was well into the 1960s when the first pilot for a French series was made by the BBC schools TV department. This proposed series would be studio-based and run throughout the entire school year, the pilot programme which was made but never broadcast was presented by the Persian singer Shusha and produced, I believe, by Peter Montagnon[7], with a space-travel storyline. Kenneth Fawdry thought it was "very imaginative... and had great potential," but it was turned down by the Schools Broadcasting Council because it "lacked the flavour of 'real France'."[8].

It was obvious that the BBC needed to produce an authentic, filmed story, on location in France, but to make a single school term's worth of such programmes would cost as much as a whole year's worth of the studio-based alternative - and a single term's worth of programmes alone could not make a major contribution to the schools' work. Nevertheless the SBC insisted this was what they wanted, and the BBC duly began production on La Chasse au Trésor with "the active participation" of the Schools Council, the Nuffield Foundation and practising teachers[9].

The series was reportedly very well received by teachers who used it - reviews in the press welcomed "a happy blend of adventure and local colour," with "none of the Christmas charade atmosphere which ruins some other programmes." The Chief Schools Inspector commended the BBC on the quality of the programmes and their value in teaching French.[10]. Kenneth Fawdry later recalled that "it enhanced our reputation among modern linguists"[11], and over a decade after the series was last shown BBC schools producer John Prescott Thomas reported that:

no broadcast seems to hold fonder memories for language teachers (than La Chasse au Trésor) and there is still scarcely a meeting or conference at which it is not recalled with nostalgia.[12]

But the series seems not to have been very widely used in practice, nor was a great deal of successful follow-up work done to make the series really useful. It's appeal seems to have been as much based on the thrill of a filmed story as any educational benefit, and a BBC schools radio producer is reported to have said later that "were the dialogue in Chinese the programmes would still be instantly comprehensible and greatly enjoyable."[13] And so, after repeats of the series in 1969 and 1970, it was quietly dropped and not replaced with another similar series, as the demand for significant French teaching in primary schools was also quietly dropped.

It was several years before BBC schools television returned to the field of modern languages, and when they did so they offered documentary rather than drama series, beginning with Tout Compris in summer 1973. Much later, in the early 1980s, John Prescott Thomas said that the time may have come for "a new, simple five-part dramatised serial in French for beginners. Grandson of La Chasse au Trésor, perhaps?"[14]. It was not until 1984 that this offspring reached the screen, when the resounding success of the Look and Read series in fostering English reading prompted the BBC to produce a French-language thriller for slightly older children called La Marée et Ses Secrets (The tide and its secrets). André Maranne also played the villain in this drama, 16 years after his turn as the criminal Lucciani in La Chasse au Trésor - perhaps Robert Lecoz, Maranne's character in La Marée, could be considered Lucciani's grandson! 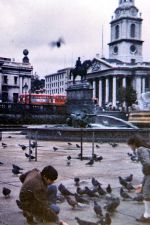 The stars of the series visiting London in 1967!

La Chasse au Trésor was filmed in the town of St Pourçain-sur-Sioule, near Vichy in Central France, in 1967. The name of the town was simplified to simply St Pourçain for the story[15].

The producer and director, Ronald Smedley, directed his francophone cast in perfect French throughout, but took pleasure in using one particular anglicism at the end of each day's filming - he would say "nous sommes fini" (literally, "we are finished") where the correct French phrase would be "nous avons fini". This intentional slip amused all of the French actors and production team greatly!

In early November 1967 the actors went to the BBC studios in London to record some dialogue. They spent bonfire night in Ronald Smedley's garden, setting off fireworks and enjoying boiled potatoes and cups of tea - the perfect British counterpoint to the French culture shown in the series![16] 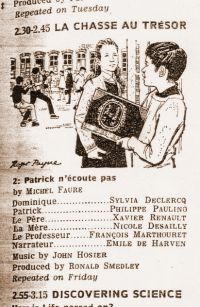 Radio Times listing for episode 2, with an illustration adapted from the pupil's pamphlet

The programmes were first shown in the summer term 1968, on Tuesdays at 2:30pm with a repeat on Fridays. They were repeated over the next two summer terms. There were 8 episodes altogether: 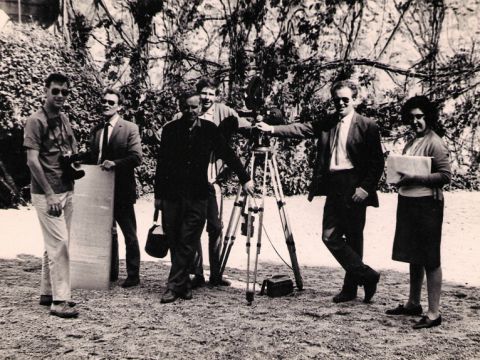 The production crew on location, including Ronald Smedley 2nd from right. Please get in touch by email if you can identify the other people here! 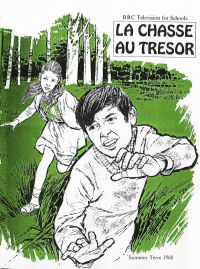 A 28-page pamphlet referred to as the "reader", containing extracts from the script of each episode which children were encouraged to re-enact in class after viewing the programme, and various exercises to do with the French vocabulary in the story such a drawing the time "sept heures et demie" on a clock face and answering yes or no ("oui" or "non") questions.

There were illustrations throughout by Roger Payne, and the front and back covers had a green-coloured drawing of Lucciani chasing the children (Lucciani was on the back cover, and Patrick & Dominique on the front). 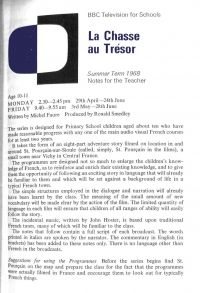 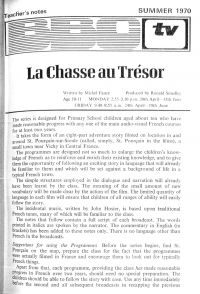 The teacher's notes basically contained the entire script of each programme, in French, although there were a few minor contractions and deviations between the text in the teacher's notes and that in the pupil's pamphlet. There were occasional stage directions given in English so that teachers could understand what was happening in the text before they viewed the programmes with the class. There were also brief suggestions for follow-up work after each episode.

The consultants for the series credited were:

Share
Retrieved from "https://www.broadcastforschools.co.uk/mediawiki/index.php?title=La_Chasse_au_Tresor&oldid=50022"
Categories:
Cookies help this website deliver its services. By using these services, you agree to the use of cookies.
History
Browse propertiesCite this pagePage informationPermanent linkPrintable versionSpecial pagesRelated changesWhat links hereRecent changes