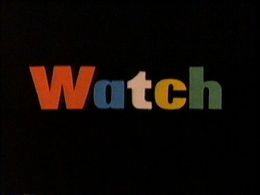 The dates for each presenter are for new episodes only, they do not include repeats.

From autumn 1992 onwards there were no regular presenters, instead each unit introduced its own presenters - real or animated - or lead characters.

Share
Retrieved from "https://www.broadcastforschools.co.uk/mediawiki/index.php?title=Watch&oldid=49292"
Categories:
Cookies help this website deliver its services. By using these services, you agree to the use of cookies.
History
Browse propertiesCite this pagePage informationPermanent linkPrintable versionSpecial pagesRelated changesWhat links hereRecent changes