Famous People with Magic Grandad is a unit of the BBC schools TV series Watch from the 1990s and 2000s, covering Modern History for primary school pupils. 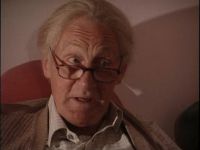 Grandad and his great grandchildren Kimberley and Gary appear for four more adventures, in which Grandad takes them further back in time than he has ever travelled before, to meet famous people from hundreds of years ago. They even travel abroad, to France and the Crimea, where Grandad can magically translate everything that is said into English. All he needs for his magic to work is a song which would have been known at the time. Grandad later sings each song again with new lyrics about the famous person they meet. Grandad no longer arranges his visits in advance so the visitors have to introduce themselves to the historical figures, but the magic now extends to preventing people in the past from being able to see the time travellers if Grandad doesn't want them to, so they are able to sneak past the guard in the Tower of London to visit Elizabeth I for example.

As well as simply witnessing history, this time the children begin to question what they are told - how they can know what is really history and what is just a story when they compare Elizabeth I with Rapunzel, how we know about events like the Great Fire of London, and why the statue of Florence Nightingale might have been made with the wrong sort of lamp.

Grandad is again played by Geoffrey Bayldon, and his first name is still Albert.

Video Plus Pack / DVD Plus Pack 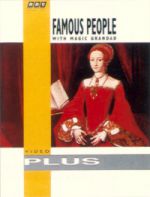 The unit was released on a BBC Video Plus Pack in 1995, containing a video with all 4 programmes and a People in the Past Resource Pack with reproductions of paintings and photographs of the famous people and events from their lives.

There were separate teacher's notes for each term of Watch until summer 1999, and after that there was a combined booklet of history teacher's notes which covered these programmes. Further details are given on the 90 Years Ago with Magic Grandad page.

A BBC Schools website on Famous People was launched in 2002, initially covering Florence Nightingale (from these Magic Grandad programmes) plus Pocahontas, Christopher Columbus and George Stephenson. It was expanded in 2004 to include Samuel Pepys (from these programmes), Edward Jenner, Isambard Kingdom Brunel, Mary Seacole (all from the Famous People 2 with Magic Grandad series), Elizabeth Fry and Henry VIII.

It is still available online: http://www.bbc.co.uk/schools/famouspeople/ 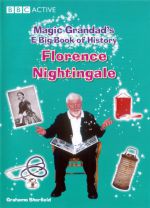 A big classroom book with lots of pictures, going over Florence Nightingale's life and the differences between hospitals today and in the past. It also includes a section on Mary Seacole, comparing Nightingale and Seacole. The book was written by Grahame Sherfield.

It comes with a book of teacher's notes giving background and suggesting activities, and including photocopiable activity sheets. The E Big Book version is a CD ROM containing an interactive PDF of the Big Book and teacher's notes, plus copies of all the individual pictures to work with. There is a big blatant spelling mistake on activity sheet 3 which has not been corrected for the E Big Book version, and because the PDF you get on the E Big Book is password protected teachers can't even correct it themselves before they print the worksheet! 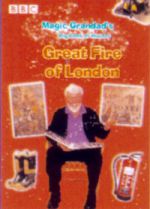 Another Big Book for classroom use. This one looks at the Great Fire of London so it goes with the Samuel Pepys TV episode. It was also written by Graham Sherfield.

A series of educational activities based on the Great Fire of London (and hence on the Samuel Pepys TV episode) introduced by an animated Magic Grandad. Children can explore how the fire started and spread and what happened afterwards.

One of the activities from the CD-ROM can be played online at the Sherston website.

The programmes were first shown in the autumn term 1994, on Wednesdays at 10:25am and repeated on Thursdays at 10:55am on BBC2. They have been repeated regularly, in almost every academic year since then on BBC2 and the CBBC Channel.

They are still shown on BBC2 as of the latest update to this page (2009), but instead of repeating the whole unit of 4 programmes in one go they are split up and shown occasionally throughout the year.

See the main Magic Grandad page for a full list of sources. Most details of the resources, including prices and release dates, are based on the various BBC annual programme guides and primary catalogues.

Share
Retrieved from "http://www.broadcastforschools.co.uk/mediawiki/index.php?title=Watch/Magic_Grandad/Famous_People&oldid=47262"
Categories:
Cookies help this website deliver its services. By using these services, you agree to the use of cookies.
History
Browse propertiesCite this pagePage informationPermanent linkPrintable versionSpecial pagesRelated changesWhat links hereRecent changes