Time and Tune: Alvida and the Magician's Cape 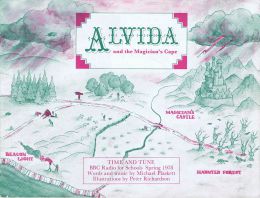 Previous unit: Flight Next unit: Scenes from The Wind in the Willows

Alvida and the Magician's Cape is a unit of the BBC schools radio series Time and Tune from the 1970s, covering Music for primary school pupils.

This cantata, based on a Swedish folk tale, was the winning work in a national competition held by Time and Tune in 1977, calling for composers and authors to write an original work for children. Two concerts based on Alvida and the Magician's Cape were given at Fairfield Halls in Croydon on Friday 10th March 1978.

A wicked magician lives in a mountain-top castle, surrounded by wonderful garden. The magician captures children by persuading them to step on his gigantic cape, then makes them dance in the garden and work for him or risk being cast out into the forest.

When the magician tries to capture a young girl called Alvida his cape gets torn, and Alvida mends it for him with a strand of her own hair. The golden hair allows Alvida to escape from the magician's clutches, and also torments the magician whenever he is wicked.

All seven songs from this unit, with a short extract from each.

High on a mountain, there is a castle
Standing so proudly against the sky...

In the forest, dark and lonely,
Wolves are prowling hungrily.

The wicked magician flies through the night,
With strong wings to take him far out of sight.

What can I use but a thorn from the rose,
And a golden hair from my head?

What is this light, that shines in the darkness,
Filling the room with its dazzling ray?

Fruit trees growing in your garden,
All around the window, what a fine display.

Go to sleep, Alvida,
Rest contented, it's time to dream.

There were ten episodes of Alvida and the Magician's Cape, the last of which was a full performance of the cantata. They were broadcast on Thursdays at 11:00am on BBC Radio 4.

There was also a preview programme for teachers (not included in this site's episode count), broadcast just once on the second Monday of the term, at 11:40am. This included a performance of the music from the unit and teaching suggestions.

To the best of my knowledge, none of the episodes from this unit have been kept in the BBC archives.

The unit was accompanied by a 20-page pupil's pamphlet printed in two colours (priced 20p), containing the words and tunes for all of the songs, plus some rhythm games, and poems that children could try setting to their own music.

There was also a 20-page A4 set of teacher's notes (priced 34p) containing the running order for each episode, preparatory and follow-up suggestions, and the piano accompaniments for all of the songs.

Retrieved from "https://www.broadcastforschools.co.uk/mediawiki/index.php?title=Time_and_Tune/Alvida_and_the_Magician%27s_Cape&oldid=49614"
Categories:
Cookies help this website deliver its services. By using these services, you agree to the use of cookies.
History
Browse propertiesCite this pagePage informationPermanent linkPrintable versionSpecial pagesRelated changesWhat links hereRecent changes