Time and Tune: Scenes from The Wind in the Willows 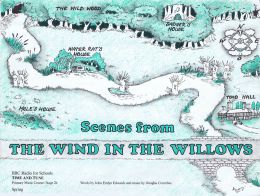 Previous unit: Alvida and the Magician's Cape Next unit: Over the Moon

An adaptation of main storyline to Kenneth Grahame's famous book The Wind in the Willows. The episodes were presented by, and the story narrated by, Douglas Coombes.

Mole meets Water Rat and discovers the joys of living on a river bank. Their friend Mr Toad shows them his horse-drawn caravan, but soon decides that he prefers a motor car. Mole goes to explore the terrifying Wild Wood and has to be rescued.

Toad escapes from his friends and goes on a series of amazing adventures (all covered in one action-packed song) before returning to deal with the invaders who have taken over Toad Hall.

The theme tune for this unit was a special song, the Prelude to The Wind in the Willows performance played on recorder, glockenspiel and triangle:

Theme SongPrelude to The Wind in the Willows

The wind in the willows is calling to me:
'Come play in the Springtime, how happy we'll be.'

Time and Tune revisited The Wind in the Willows for a completely new production with different songs in spring 2003.

All seven songs from this unit, with a short extract from each. The words for all songs are by John Emlyn Edwards, and the music by Douglas Coombes.

Glint! Gleam! Sparkle!
Oh, what a sight to see.

Voice of wind through branches humming,
Mm, song of the wild wood.

I'm a master of disguise,
I've a thousand tricks to play.

SongThe Wind in the Willows

As well as the above seven songs and the Prelude, there was also a musical piece on the Terror of the Wild Wood, played on xylophone and cymbals:

SongTerror of the Wild Wood

This unit consisted of 10 episodes, the final 2 of which were a full rehearsal and performance of Scenes from The Wind in the Willows.

Recordings of all 10 episodes are held in the BBC archives.

The unit was accompanied by a 24-page pupils' pamphlet containing the words and tunes to all of the songs and some rhythm exercises, which were referred to in detail during the broadcasts, and an A4 booklet of teacher's notes.

These resources were originally published for the 1986 broadcast, and they were reprinted without modification for the 1988 broadcast. Originally this unit built on the work of The Tailor of Gloucester from autumn 1985, which used 'cat', 'mouse' and 'tai-lor' as names to help children learn the basic musical notes. When it was repeated it built on the work of the new unit The Musicians of Bremen from autumn 1987, but things were orchestrated so that this new unit also used 'cat', 'mouse' and 'tai-lor', however relevant to the story, so that the reprinted publications for Scenes from The Wind in the Willows would still make sense.

Share
Retrieved from "https://www.broadcastforschools.co.uk/mediawiki/index.php?title=Time_and_Tune/Scenes_from_The_Wind_in_the_Willows&oldid=49633"
Categories:
Cookies help this website deliver its services. By using these services, you agree to the use of cookies.
History
Browse propertiesCite this pagePage informationPermanent linkPrintable versionSpecial pagesRelated changesWhat links hereRecent changes