Johnny Jack Tar is a unit of the BBC schools radio series Music Makers from the 1970s, covering music for primary and secondary school pupils.

A comic opera story set in a Plymouth inn at the end of the Napoleonic War. Johnny has been discharged from the Royal Navy and returns to find his sweetheart, the landlord's daughter. But he remains at risk from the press-gangs searching the city for men to press into service as 'Jack Tars', or sailors.

The story is built around seven traditional British folk songs, using their original words, and so several characters are named to match the songs. 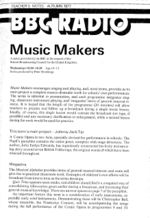 A 28-page pupils' pamphlet containing activities and the full play script and music for Johnny Jack Tar, illustrated by Peter Wane, with a percussion illustration by David Warner.

There was also a booklet of teachers' notes.

Share
Retrieved from "https://www.broadcastforschools.co.uk/mediawiki/index.php?title=Music_Makers_(radio)/Johnny_Jack_Tar&oldid=50549"
Categories:
Cookies help this website deliver its services. By using these services, you agree to the use of cookies.
History
Browse propertiesCite this pagePage informationPermanent linkPrintable versionSpecial pagesRelated changesWhat links hereRecent changes