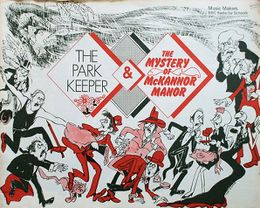 The Park Keeper and The Mystery of McKannor Manor is a unit of the BBC schools radio series Music Makers from the 1970s, covering music for primary and secondary school pupils.

Two separate units, the comic story of The Park Keeper in the first half of term, followed by The Mystery of McKannor Manor a 'thriller' about two incompetent detectives.

The Park Keeper was re-mounted in a new production by Music Makers in 1987 and there is a separate page about that production.

I don't have details of the songs from this unit. If you can help please get in touch by email!

The unit was accompanied by a combined pupils' pamphlet covering both of the productions, and a booklet of teachers' notes.

Share
Retrieved from "https://www.broadcastforschools.co.uk/mediawiki/index.php?title=Music_Makers_(radio)/The_Park_Keeper_%26_The_Mystery_of_McKannor_Manor&oldid=50550"
Categories:
Cookies help this website deliver its services. By using these services, you agree to the use of cookies.
History
Browse propertiesCite this pagePage informationPermanent linkPrintable versionSpecial pagesRelated changesWhat links hereRecent changes