Merry-Go-Round: Keep Up with the Times

Keep Up with the Times is a unit of the BBC schools TV series Merry-Go-Round from the 1970s and 1980s, covering Mathematics for primary school pupils.

Two animated birds investigate, and argue about, the times tables, in these short cartoon programmes. Each week a different table is covered, and the birds link together footage of children counting out the table, or sorting themselves into groups, and animated sequences showing patterns and tricks.

The birds feed numbers into a "times machine" which outputs the results of a multiplication, so when they are looking at the two times table they first feed in the number 1, and get the number 2, which they feed back into the machine to get 4, then 8 and 16 and so on. Towards the end of the series the machine is reversed to become a division machine. 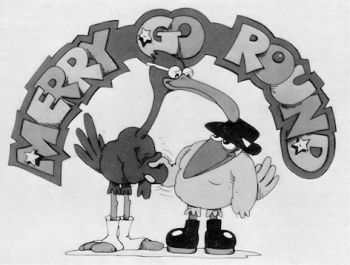 The birds on Merry-Go-Round

Share
Retrieved from "https://www.broadcastforschools.co.uk/mediawiki/index.php?title=Merry-Go-Round/Keep_Up_with_the_Times&oldid=47797"
Categories:
Cookies help this website deliver its services. By using these services, you agree to the use of cookies.
History
Browse propertiesCite this pagePage informationPermanent linkPrintable versionSpecial pagesRelated changesWhat links hereRecent changes