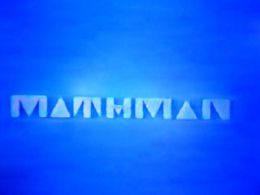 Mathman is an ITV schools TV series from the 1970s, covering Mathematics for primary school pupils.

Some mathematics for infants

Simple maths with a friendly robot for children just starting school - the series was always shown in the autumn term at the beginning of the new school year.

An absent-minded inventor called Mr Bumbleboots builds a robot - Mathman - to be a companion to his young niece. It's lucky that he does because a wicked witch is out to cause trouble and Mathman puts her in her place. 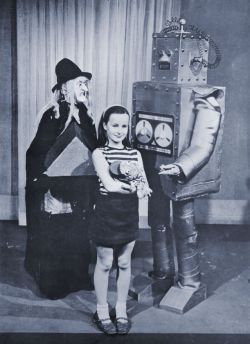 In the first series in 1971 Mr Bumbleboots' neice was a dark-haired girl called Margaret, and Mathman fought a witch simply called Wickedwitch, from over the hill, who used Spelljuice to cause trouble. A second series in 1973 was a slight variation on the first for a new generation of school starters.

A sequel series in 1974 called More Mathman was made in 1974 for children in their second year of school, introducing more advanced topics such as cardinal numbers and addition, and even some writing and spelling. Mr Bumbleboots' niece was now a redhead called Linda and Mathman faced two new witches, sisters called (I think) Gertie Bootles and Wally Wobbles. They can monitor the activities of Mathman and friends using a magic seeing bottle.

Finally, a new series of Mathman programmes for five-year-olds was made in 1977, once again offering a slight variation on the original series. This time Mr Bumbleboots' neice Sarah took part in the adventures and Mathman combatted a witch called Snitchywitch, who could spy on the friends through her magic screen. All of the concepts from the first series were revisited.

Mathman with a set of girls and a set of boys.

There have been other Mathmen in schools programmes over the years. One Mathman was an animated parody of the computer character Pacman in the mathematical sketch show Square One TV (based on an American series, the British version was screened by the BBC from 1992 to 1997). Meanwhile Maths Man was a student at Superhero School learning to solve mathematical crises in three TV series of Megamaths (screened by the BBC from 2000 to 2008).

A brief description of each episode, highlighting the mathematical content.

Mathman's theme tune was a remarkable, funky piece of instrumental music which easily rivals the BBC's famous Radiophonic theme tunes. It was probably a library track but I don't know who composed or performed this music - if you can help identify it please get in touch by email.

Here is a fairly low-quality microphone recording of the opening to episode 2 of More Mathman:

The animated opening titles involved the word "MATHMAN" being broken down into a series of triangles and rectangles, which rearrange themselves into the shape of a robot.

Mathman was "prepared" for Grampian Television by Ronald Sawdon of Aberdeen College of Education[1].

I do not know any of the other credits for the series and I don't know who the actors were. If you have any information please get in touch by email. 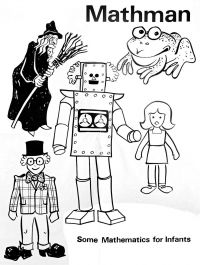 Grampian Television was well-known for working in close partnership with local education authorities, teachers and parents in developing their schools programmes, and this is demonstrated in the transmission patterns of Mathman.

When the series began in Autumn 1971 there were three transmissions per week (all within 24 hours of each other). First, late on Tuesday evenings at 11:30pm in a special preview for teachers and parents. This preview screening included an additional 10-minute discussion segment about how the series could be used educationally. The schools transmission was then on Wednesday at 11:35am, and finally there was a late afternoon screening at 3:45pm on Wednesdays "when children may watch at home with mothers."[2]

In Autumn 1973 the late afternoon home transmission was dropped, but the late night adult preview continued. The series was broadcast for schools on Tuesdays at 10:27am and Thursdays at 10:35am.

More Mathman in Autumn 1974 kept almost the same pattern - a late night preview followed by schools broadcasts on Tuesdays at 10:47am and Thursdays at 10:35am.

Each year's broadcasts were accompanied by a card-cover booklet of teacher's notes containing a brief summary of the content of each episode and extensive suggestions for classroom follow-up.

The front cover had the same basic design as all of Grampian's teacher's notes - a large box containing a ring of children, with a symbol for the programme in the centre. In this case the symbol was the stylised Mathman robot design constructed from rectangles and triangles.

Over the years the teacher's notes were accompanied by photographs, work cards, a colouring-in poster and instructions for games to be played in the classroom.

Share
Retrieved from "https://www.broadcastforschools.co.uk/mediawiki/index.php?title=Mathman&oldid=48037"
Categories:
Cookies help this website deliver its services. By using these services, you agree to the use of cookies.
History
Browse propertiesCite this pagePage informationPermanent linkPrintable versionSpecial pagesRelated changesWhat links hereRecent changes