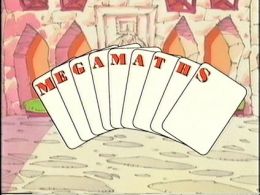 Megamaths is a BBC schools TV series from the 1990s and 2000s, covering mathematics for primary school pupils.

The first four units of programmes concerned the inhabitants of a magical castle on table mountain, and then three further units featured trainees for the role of Maths Man at a superhero school.

Megamaths was also the title of a BBC school radio series for the same age group, in which Maths Man and other characters give listeners a mental maths quiz.

A castle high on top of table mountain is home to an entire pack of playing cards, all played by real people, and the adventures of the Kings, Queens, Jacks, and all of the number cards inevitably involve the application of mathematics.

The Joker looks after the children who come to visit the castle, and is also the link with children watching in the classroom. The Joker in the first unit (Jenny Hutchinson) introduces the programmes in rhyme and talks directly to the audience. She has the power to appear and disappear with a click of her fingers. A new Joker (Gareth Jones) arrives at the start of the second unit. He is still the genial host, but he does not display any magical powers. 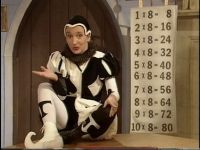 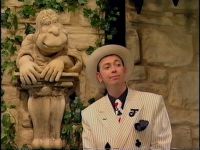 The second Joker (and Goyle)

The castle entrance is guarded by two mischievous gargoyles, Garg and Goyle, who often verbally spar with the second Joker. They observe the goings-on in the castle and summarise the maths that everybody has learnt at the end of the episodes. Below stairs in the castle a dragon called Brimstone and a kitten called Digit enjoy their own adventures. These two characters are an animated interlude in each episode. They were drawn by three completely different animation studios over the years, and their appearance changed quite dramatically.

Some of the regular features in the castle include a tournament in which two of the royals compete with each other to solve mathematical equations presented by the acrobatic number cards. They take plenty of time working out the answers, so the audience has a good chance to work out the answers first.

The Joker welcomes teams of schoolchildren into the castle courtyard to play physical mathematical games, such as fitting numbers into equations made out of battlements, life-sized snakes and ladders, buying clothes within a budget, and measuring different items. All of these challenges could be reproduced in the classroom.

In the Money programmes an auction takes place at the start of each episode, in which the characters, whether meaning to or not, bid each other up to the amount of money which is the subject of that week's programme.

There are also acrobatic displays and dances, for example in the Division programmes five acrobats repeatedly rearrange themselves to show how division is related to multiplication, and original songs. In the Tables programmes each table is chanted at the beginning and end of the episode. Throughout all four table mountain units one of the featured acrobats was Sarah-Jane Honeywell, later to become a well-known presenter of Cbeebies TV programmes.

The majority of each episode is taken up with the adventures of the royal cards as they encounter mathematical problems, such as dividing building materials evenly between four builders, and working out how much money the Queen of Diamonds could have saved if she didn't think that accepting change was beneath her.

Curiously the Queen of Clubs was the only royal, in fact the only playing card, not to appear in any of the TV episodes. She certainly existed, as she is referred to in the episodes (for example at the start of the Money to One Pound episode the King of Clubs instructs the Jack to buy the rubbish glass things for the Queen) and the worksheets, but never took part in the tournaments or adventures with the other characters.

The actors playing the Kings remained the same for most of the series, but almost all of the other roles were recast multiple times.

At the Superhero School space station a young recruit enters a learning pod, hoping to develop the skills to become... Maths Man!

In the first unit, Fractions, the recruit (Craig Heaney) is guided by a mathematical tutor called Her Wholeness. The format allows Maths Man to be directly taught maths while viewers see him work things out, without the viewers appearing to be taught directly. There are intervals for a quiz show, Find the Fraction with Colin Cool, and a sports show called Sports Stand with presenter Sue Harker and pundit Harry Fraction.

Maths Man even appears to have a super villain to contend with. Each week he ventures down to Earth to help children overcome the mathematical mischief caused by the dastardly diddling Diddler.

A different recruit (Paul Vates) appears in the following unit, Shape and Space. He is guided by a tutor called His Wholeness and aided by the friendly on-board computer VERA (Voice Enhanced Resource Activator) and an animated character called 2D3D who appears in his virtual reality glasses. This recruit also faces regular challenge on planet Earth, but he also talks directly to the camera, to his "maths team" viewing from their classroom. At the end of each episode His Wholeness sets a puzzle for the maths team.

The same recruit appears in the final Megamaths unit, Problem Solving, sent down to Earth to tackle problems such as dividing eggs on a farm, weighing animals at an RSPCA centre, and buying ice cream on the beach. 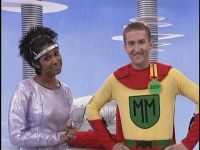 Her Wholeness and Maths Man in 2000 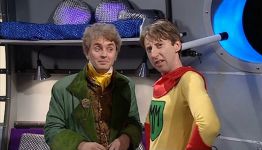 His Wholeness and Maths Man in 2001

Teacher's notes were published each term that the series was broadcast from 1996 to 1999. They were available separately for each unit for a while afterwards.

Activity books, containing photocopiable worksheets and lyrics to the songs from each unit were also available for the table mountain units. The activity books features the playing card characters but could still be used independently of the TV programmes. The teacher's notes also included photocopiable activity sheets, but completely different ones.

Activity packs were available including the activity books and audio cassettes with songs and music from the TV programmes, and there were A2 posters for the classroom wall.

There was a Megamaths: Tables CD-ROM released in 1998, and a website at http://www.bbc.co.uk/megamaths (archived 2005) with games set in the castle.

All of the Megamaths units were released on Video Plus packs, containing slightly edited versions of the episodes on video, teacher's notes and the relevant activity books.

The Fractions unit was also released on a DVD Plus pack in summer 2006. Fractions was chosen because it was "the most popular of the Megamaths units, covering an especially challenging part of the curriculum in an enjoyable and intriguing way."[1]

Share
Retrieved from "https://www.broadcastforschools.co.uk/mediawiki/index.php?title=Megamaths_(TV)&oldid=48077"
Categories:
Cookies help this website deliver its services. By using these services, you agree to the use of cookies.
History
Browse propertiesCite this pagePage informationPermanent linkPrintable versionSpecial pagesRelated changesWhat links hereRecent changes