Friday Magazine is a BBC schools TV series from the 1960s, covering Citizenship and PSHE for secondary school pupils.

In the summer term of 1960, the first schools television programme for slow learning children in the early years of secondary school went out on Friday afternoons on BBC1, with the title Friday Magazine. This short series was a compilation of features, including documentary films on subjects of interest to children, things to do, and a drama serial called The Corner Shop featuring the day to day problems of the Anderson family.

The family drama aspect was very similar to the schools radio programme The Jacksons, which had been running since the mid-1950s aimed at a similar audience. After its one experimental term of broadcasts, Friday Magazine was continued as the series Television Club, which would run for another 20 years.

I believe the title was inspired by the BBC's Wednesday Magazine programme, shown under the Mainly For Women banner since the late 1950s, and presented as a programme in its own right in 1960[1]. Women could have their magazine on Wednesdays and schoolchildren could have theirs on Fridays!

There were four regular features in the programmes, and apart from The Corner Shop which ran every week, episodes of each feature were scattered throughout the run. The episode list below gives details of all the features in each episode.

Brian Starkey presented instructions on Making a Simple String Puppet in four parts, concluding with The Play in the final episode.

There was footage from Hill Top Farm, a stock farm in Kent.

Film of journeys to Birmingham by various means of transport - rides in a long-distance lorry, on a canal boat and by goods train.

And the drama serial The Corner Shop written by Norman Longmate and set in the local grocery shop run by the Anderson family. Their adventures were low-profile and simple, but recognisable to the teenage audience. For instance, according to the description of episode 7 in the BBC archive catalogue, the drama in this episode showed Bob Anderson planning for a holiday, "explaining what a sleeping bag is and reassuring (Susie) that the boys will chase the cows away while the girls do the cooking". 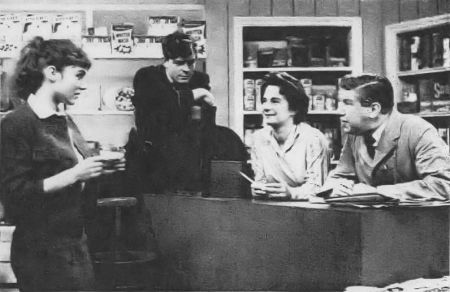 The Anderson family in their Corner Shop

The series was shown just once, in the summer term of 1960 on Friday afternoons at 2:05pm. There were two interruptions to the weekly transmissions - the week ending 10th June was Whit week and there were no schools programmes on at all, and Friday 1st July saw the Men's Singles Final tennis match at Wimbledon all afternoon.

Friday Magazine was valued by teachers who used it, who provided extensive feedback to the BBC, and who apparently cried "disgraceful"[2] when the series was not immediately continued in the next school year.

In fact the School Broadcasting Council requested that the programme continue and be expanded to run for two terms a year (the spring as well as the summer). The BBC did bring the series back in the spring of 1962, suitably expanded and concentrating on the adventures of a whole new family. This new series was titled Television Club, and there is a lot more information about it on this site.

According to BBC archive catalogue, just a single episode from this series - episode 6 - still exists in full in the BBC archive. The Corner Shop drama sequence from episode 7 also survives.

Share
Retrieved from "https://www.broadcastforschools.co.uk/mediawiki/index.php?title=Friday_Magazine&oldid=47362"
Categories:
Cookies help this website deliver its services. By using these services, you agree to the use of cookies.
History
Browse propertiesCite this pagePage informationPermanent linkPrintable versionSpecial pagesRelated changesWhat links hereRecent changes